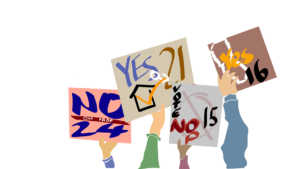 Voters had to decide on 12 propositions on Nov. 5. In the end, five emerged as winners.

Under this proposition, $5.5 billion will be authorized in new bond money for stem cell and medical research. According to ABC30 News, this money will be designated for research and therapies for nervous system disorders such as Alzheimers, Parkinson’s and dementia. It will also fund research in cancer, heart disease and diabetes.

While proponents argue that this research is invaluable and funds further treatments and cures for chronic threatening diseases, others point to the $7.8 billion that the government cannot afford to spend during an economic and budget crisis. There have still been “poor results” after $3 billion already spent on the initiative, according to the official ballot measure argument against. The prop passed with 51.1 percent in support and 48.9 percent in opposition.

Less controversial than expected, around 59 percent of California residents voted in favor of this proposition. California had originally prohibited state parolees and prisoners from voting, but more than 50,000 former California prisoners will now be able to vote while on parole and even run for office under certain conditions.

Proponents of this prop argue that this places California in alignment with other states that have passed the same measure; a parole commission report has also found that citizens who complete prison terms and have their voting rights restored are less likely to commit future crimes.

Opponents contend that granting violent criminals the right to vote before their sentence ends allows those convicted of the highest crimes to vote before repaying their debts to society. This proposition ended up passing with 58.6 percent of the vote.

“Though Prop. 17 is giving felons back their right to vote [as stated in] the 15th Amendment, I think receiving their right to vote after prison term should depend on what they did,”  freshman Sarah Zhou said. “You obviously wouldn’t want a murderer voting.”

The passing of Prop. 19 will allow new property tax breaks for older homeowners while simultaneously increasing property taxes for those inheriting property from their parents or grandparents. Because inherited homes will now be taxed at a higher rate, living in California may become increasingly unaffordable for those living in those homes.

Proponents point out the positive effects this has on severely disabled homeowners, seniors and wildfire victims who no longer need to pay as much in taxes, while one of the arguments against listed on CaliforniaChoices.org, a nonpartisan clearinghouse for election information, maintained that it “takes away one of the best tools parents have to help their children — the right, enshrined in California's Constitution since 1986, to pass their home and other property on without any increase in property taxes.” The vote margin was narrow, with approximately 51.1 percent in favor versus 48.9 percent not in favor.

Another controversial measure, the passing of proposition 22 has allowed Uber, Lyft and other app-based driving companies to treat their drivers as independent contractors rather than regular employees. Backed by more than $200 million from these  wealthy companies, this became the most expensive measure in California history.

Minimum wage for these drivers will now be determined by the time they spend fulfilling rides or requests, not the time they spend waiting for gigs. Though the passed measure would grant these employees more freedom in where, when and how long they work, it also does not offer protections such as workers' compensation, unemployment insurance, family leave or sick leave nor does it allow workers to unionize. The measure passed with 58.6 percent of the vote; 41.4 percent opposed its passing.

“I think the main problem with the support of this proposition is that drivers spend a lot of time waiting, so at the end of the day, they really aren’t making that much to begin with,” sophomore Ainsley Sheen said. “Since these companies would now count their insurance in compensation, at that point they still wouldn’t get a minimum wage even when working.  I have very little respect for Uber in particular because its business model lives off investor money.”

This law will continue to strengthen consumer data privacy protections in California. According to the California Official Voter Information Guide, it will allow consumers to stop businesses from selling or sharing their personal information, including details such as their race, religion and health information. Prop. 24 has also set restrictions that will make it harder for tech companies like Google and Facebook to track and gather data to sell to third-party advertising partners.

Those in favor of the proposition claim the strengthening of consumer privacy rights allows people to hold corporations more accountable when violations of data rights occur. Opponents argue that it actually reduces privacy rights by creating “pay for privacy” schemes that will make workers wait years to learn what confidential information employers collect on them.

Those in opposition also assert that the prop provides consumers with a false sense of data security as it would also allow companies to access personal data from Californians’ devices as soon as they leave the state. This group contends that the measure actually makes it harder to stop tech corporations from selling personal information due to the “pay for privacy.” In response, those in favor suggest that this aspect of privacy would empower consumers by giving them the choice of which businesses they entrust with their personal data. Around 56.2 percent voted for the prop, while 43.8 percent voted against.

“Those who don't pay more could get inferior service — bad connections, slower downloads and more pop up ads,” the official ballot measure argument against states. “It's an electronic version of freeway express lanes for the wealthy and traffic jams for everyone else.”

Most notably, Prop. 16 and Prop. 18 have failed. If it had passed, the former measure would have reinstated affirmative action for California’s universities, public agencies and community colleges. 57.2 percent of voters opposed the proposition while 42.8 percent supported it.

“I think California thought right in opposing it,” freshman Simarya Ahuja said. “Don't get me wrong, I'm all for ending discrimination. But if I were to be applying for a job in the future, I wouldn't want to be hired simply because I am of a certain race or gender; I would want to be hired because I have the qualifications.”

Another highly debated proposition, this measure would have granted 17-year-olds who turn 18 before the next general election the right to vote in the primary election and other preceding special elections. If passed, California would have joined 17 other states in allowing 17-year-olds to vote as long as they turn 18 by election day.

Proponents state that such a move is necessary to generate youth civic engagement and create lifelong participants in upholding democracy, while opponents cite the fact that 18 is the legal age for many adult responsibilities that voting should continue to be included in. The measure ended up failing, with 56 percent of voters opposing its contents and the other 44 percent backing it.