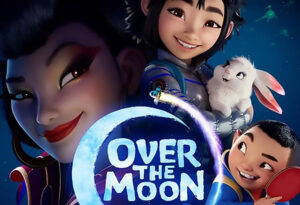 After seeing several posts praising the new Netflix Film “Over the Moon” on the popular Facebook group Subtle Asian Traits (SAT), I knew I had to watch it. The posts had congratulated SAT member Cathy Ang, who voiced the lead character Fei Fei, applauded the degree of Asian representation within the film and featured photos of Bungee, an adorable pet bunny in the film.

“Over the Moon” premiered on Oct. 16, and ranked first for a while on Netflix’s Top Ten in the U.S. It is a PG-rated animated film co-produced by Gennie Rim and Peilin Chou. The plot features a young Chinese girl, Fei Fei, who struggles to accept her mother’s death and is unable to move on. She builds a rocket to the moon to meet the Moon goddess Chang’e in hopes of proving to her father that love is for eternity.

The most appealing part of this movie for me was the abundance of Asian representation. Many of the crew members of the film are of Asian descent, including both producers. The film also boasts an all-Asian cast, including some well-known actors like John Cho, Sandra Oh and Ken Jeong.

Besides this, I liked that the producers of the film also paid close attention to details and events within the film to depict real-life experiences. Apparently, one of the board artists for the film initially sketched Fei Fei’s parents kissing, but quickly discarded the scene to add authenticity to the East Asian household.

After reading about the director’s choice of having Fei Fei’s parents not kiss on NBC News, I was impressed by the director’s willingness to break away from Western expressions of love that would skew the accuracy of films about Asian cultures.

The creators also included a family feast around the lazy susan on the night of the Moon Festival, a flower in Fei Fei’s hair after her mother died and the Chinese guardian lions that bring Fei Fei and Chin to the moon. I liked that the movie didn’t unnecessarily over-explain these details since they are genuine, culturally relevant experiences that an Asian audience would easily pick up on.

Another aspect I appreciated was that much of the movie is centered around familial love. I could relate to the way Fei Fei interacted with her family, more specifically, how the love was communicated between them.

Throughout the course of this movie, Fei Fei and her father share a lot of emotional moments, yet neither one of them ever explicitly says “I love you.” Still, the love between them is mutually understood. Similarly, the grandmother in the movie indirectly shows care through fussing over whether Fei Fei is eating enough with an expecting, somewhat critical attitude — a form of parental affection that I can relate to.

Besides the cultural representation that the movie provides, my favorite parts are the scenes with the characters Bungee and Gobi. Bungee is a super adorable and lovable pet bunny, and Gobi is an entertaining green glowing space puppy that reminds me a lot of Olaf from Disney’s “Frozen.”

Unfortunately, the film felt overly similar to other Disney movies, possibly because the film’s directors, Glen Keane and John Kahrs, had worked at Disney on films like “Tangled” and “Aladdin.” I felt that some plot aspects in “Over the Moon” were unoriginal, such as having the mother die in the beginning, giving the lead character a funny animal companion and an unwanted sidekick and incorporating many songs throughout, all of which mimic Disney classics.

Additionally, the movie isn’t totally perfect in its cultural accuracy. Certain details, such as characters biting into mooncakes like apples instead of slicing them, stood out.

The most significant to me was the film’s representation of the Chinese legend of Chang’e, a story that is often told on the night of the Mid-Autumn Moon Festival. The legend has many variations, but the one featured in “Over the Moon” focuses on the eternal love between the moon goddess Chang’e and the archer Hou Yi.

Growing up hearing this story, I appreciated its incorporation into the film, but the creators took creative liberties to modernize the classic Chinese folklore, making Chang’e a pop star. Though it has good intentions of delivering a fresh take on the legend, it just did not sit right with me and detracted from the overall plot.

Although “Over the Moon” lacks a bit in originality and the interpretation of the tale of Chang’e is strange, the good still outweighs the bad. The movie follows an emotional and meaningful storyline, conveying important themes of familial and parental love, and the depth of culture and heritage conveyed through the movie was very well executed. I recommend this movie for a lighthearted viewing, but it’s not something I would go back to rewatch.