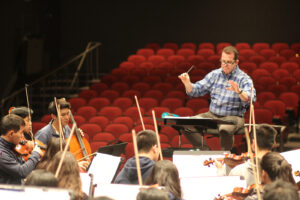 Music teacher Mike Boitz leads a rehearsal after school on a recent weekday.

As other students stream out after the end of sixth period, students who are a part of the Saratoga Symphony Orchestra, which is composed of fourth-period strings and third-period winds, have just begun their after-school rehearsal during so-called eighth period.

These students are the highest-ranking musicians in band and string orchestra, attending required rehearsals right after school during second semester Mondays and Wednesdays; the rehearsals last for over an hour each.

On weeks with predominantly Blue Days, students are required to come in on Mondays and Wednesdays from 2:20-3:45; on Red Day-dominated weeks, they come only on Wednesdays from 6-8:30 p.m.

On some days, members of the orchestra meet twice due to this schedule, once during the school day and again after school.

This is the case for junior Emma Hsu, a viola player who treats these orchestra rehearsals as an entirely different class that is separate from the normal fourth-period orchestra class.

“The repertoire we play in SSO is always different from what we play in fourth period,” Hsu said. “The time we spend in SSO is almost equivalent to another whole period.”

Senior Janice Yang, who plays the cello in SSO, said the extra hours spent in the music building after school is entirely reasonable.

“Just like sports or robotics or speech and debate, it’s a commitment,” Yang said. “It’s not a hindrance to my schedule but rather a part of it.”

For Hsu, the rehearsals can sometimes be inconvenient but always manageable.

“Especially because SSO starts second semester, I often do have conflicts with it because I have a sport and academics are more rigorous, but I am usually able to work around it, as I essentially treat SSO like a separate class,” Hsu said.

During these rehearsals, the musicians spend time practicing different pieces that they learn in class, usually in preparation for upcoming events. Students also are occasionally given the chance to listen to guest performers and speakers, such as the recent performance of Leo Kim, a skilled clarinet player attending University of Michigan School of Music.

Although Yang does admit that the additional orchestra rehearsals are like having a whole extra period tacked on some days, she enjoys it and uses it as a break from academics.

“SSO is definitely a positive aspect in not just my academic life, but my high school experience as a whole,” Yang said. “The music, people, stories and life lessons are completely worth the time and effort we put in.”