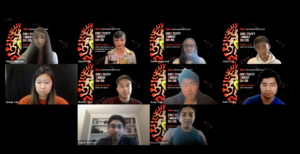 From crimes and entrepreneurship, this year’s presenters focused on novel ideas that have been brought to light over the past few years.

Junior Vignav Ramesh reviewed his notes one last time as 2021 Saratoga High TedX moderator and president junior Naisha Agarwal called out his name. Ramesh took a deep breath, unmuted his mic and shared his presentation on his experience as a high school entrepreneur.

The 10-member TedXSaratogaHighSchool club hosted a speaker event with the theme “Creativity Amidst Chaos” on March 27.

She realized that “Creativity Amidst Chaos” was a perfect description of her and her club members’ lives in the past year.

“We are not just talking about the pandemic chaos,” Agarwal said. “But the chaos in any field, and how people have chosen to be creative in addressing those problems and proposing unique solutions.”

Ramesh described how he founded a company called Zigantic, an enterprise service that helps to get reliable testers for companies, and how his efforts were often overlooked due to his age, highlighting the challenges of being a high school entrepreneur.

The second speaker was Yeh, who used poetry to convey messages about relevant societal topics, such as hate crimes against Asians.

The event concluded with Harvey, an activist who spoke on her work in climate change, explaining its causes and how people’s actions affect this global issue.

Due to the pandemic, these presentations were given in an online format for the first time. The event was canceled last year. Sophomore Samika Agarwal, the club’s marketing head, said the new format offered both rewards and setbacks.

“We were able to get a lot of speakers this year,” she said. “Sadly, some timings didn’t work out so we couldn’t showcase all of the amazing presentations, but pivoting the event online led to people having more ability to talk about their projects and experiences since we had people from the industry talk as well.”

The club scouted speakers by posting a speaker form on social media platforms and by word-of-mouth requests. From the numerous responses they received, they selected the four speakers based on the creativity and uniqueness of their topics.

Because the virtual format allowed for audience members beyond just SHS students, Samika Agarwal noted that there was an increase in the number of viewers. In 2019, around 60 people attended the in-person event; this year’s online event had 72 attendees.

However, the virtual nature of the event also led to various complications. According to Samika Agarwal, marketing was considerably harder this year compared to in the past. Usually, TedX publicizes the event through word-of-mouth or announcements during school hours. This year, however, due to the small size of the club and remote learning, the TedX club found it difficult to spread the word about the event.

To mitigate this problem, the club came up with creative ways to advertise their event. From reposting the event poster as much as possible on social media platforms to asking performers to spread the word, the club was able to garner a sizable audience.

In the end, Samika Agarwal said all the effort paid off.

“The speeches were especially touching to me because it not only brought awareness to a serious but not as talked about issue, but also helped us recognize our privilege as Saratoga students,” she said. “It was a great experience and I think everyone should have the chance to listen and be a part of it.”