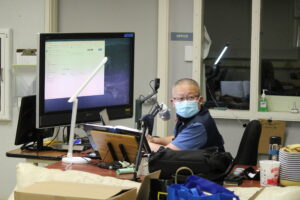 Math teacher PJ Yim prepares to simulcast his lesson for the day during phase 3A on March 24.

With hybrid schooling's beginning approaching rapidly, both students and teachers are looking forward to the partial return to school on April 12th. With this, various changes are coming to scheduling and daily routines.

When junior Jaime Fernandez da Ponte stepped onto campus on March 24 during Phase 3A of the district’s reopening plan, he first noticed the yellow Screener19 posters plastered all over the school, reminding him to complete his daily COVID-19 health screener on his mobile phone before entering his classroom.

In the coming weeks, other students who return to campus will find themselves facing similar rules. As the school prepares to enter Phase 3B beginning after spring break, staff and students alike are continuing to prepare for a campus that will look and feel very different.

Beginning on April 12, a group called Cohort A will be attending two in-person classes per week on Mondays and Tuesdays, with Cohort B attending class on Thursdays and Fridays. Each cohort comprises around eight to 10 students per class on average.

On the days when cohorts are expected to stay at home, they will be attending class online, while Cohort R is the group of students opting out of in-person learning completely. Wednesday advisory periods will continue to remain online for at least the month of April but may become actual class days starting in early May as the district tries to gradually step up reopening and increase the number of students on campus.

Passing periods have been shortened to 10 minutes and academic and mental health support such as office hours, CASSY and tutoring will remain the same as usual.

While COVID-19 safety measures such as Screener19, designated restrooms and cohort grouping will remain the same as they were in phase 3A, administrators are looking to implement new procedures such as e-hall passes and parent volunteers for Zoom rooms.

One of the major developments includes new e-hall passes that will replace the laminated signs and sandals from last year. The administration plans to hold a training session using these new virtual passes in April with the purposes of minimizing physical contact, increasing efficiency and tracking students’ whereabouts.

“The hall pass would be what we would play with in 3B so that students and staff get a chance to use it and see if it's something we want to adopt for next year,” Louie said. “A program like this is a good opportunity for us to see how we can best support our staff and students while being energy-efficient, because we're not going to be using paper and physical objects.”

Perhaps the biggest challenge for teachers will be simulcasting their in-person classes to students tuning in on Zoom or Google Meets.

Although the process of simulcasting may be different for each subject, its general purpose remains the same: having teachers use the same technology as in remote learning, only in an in-person environment. To prevent any issues with Zoom waiting rooms and questions, the administration is currently looking for parent volunteers to act as Zoom hosts during simulcasting.

Spanish teacher Sarah Voorhees, who has been simulcasting for her Period 1 AP Spanish class since March 8, has witnessed the enhanced academic experience for in-person students, especially when it comes to studying world languages.

For language classes especially, Voorhees said that the transition to phase 3B would help returning students immensely. While simulcasting allows remote and in-person students to learn the same material, Vorhees is concerned about students’ unequal level of speaking practice.

“You can present vocabulary, grammar and culture, but you can't replicate the in-person conversations using that vocabulary and grammar to talk about culture on Zoom,” Voorhees said.

Senior Kimball Small, a student in Voorhees’s AP Spanish class, has found in-person learning particularly effective. It allows foreign language students like him to more readily apply language practice, as they can engage in conversation with peers and interact organically with teachers using the language.

Students like Small who come to school in-person are able to interactively learn under the instruction of their teacher, making Phase 3B a much-anticipated and needed change for foreign language classes.

While some students are eager to return to school for 3B for a better learning experience, others, including Fernandez da Ponte, are more hesitant. In particular, he is concerned about how the school will manage the “sudden influx of students” and the potential difficulty of “keeping track of those that do not follow precautions as accurately as is necessary.”

Nevertheless, Fernandez da Ponte is excited to return to a traditional classroom experience with more opportunities for personal interactions among teachers.
“At least within my friend group, everyone seems pretty optimistic about returning to school,” he said. “I think that many of them are also tired of online school and want a more personal academic experience.”

As 3B draws closer, Louie is also hopeful about the coming weeks and months.

“It's really nice to walk around campus and to see students again,” Louie said. “Teachers really appreciate that interaction, even if there are just a few students in the room. We are going to be as flexible as we can to support our students. Hopefully we can get through the semester with no health incidents, no health issues, and ultimately get into August with things being pretty close to normal.”