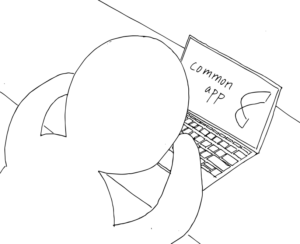 College applications: widely regarded as the most stressful and tedious part of most students’ four years of high school. They’re intimidating at first glance, requiring students to create a list of schools months in advance, ask teachers for recommendation letters a year early and write dozens of essays. They’re also the unfortunate dictator of many of our school’s students’ extracurricular pursuits and course selection.

In reality, I’ve found college apps are not as evil as they seem.

I once heard that applicants need to write around 80 essays in total, but this is false. A Facebook poll showed that most Saratoga students apply to 10-20 schools, and in applying for 20 colleges, I wrote 61 essays — but 25 could be reused or reworded for other schools’ prompts. In other words, once you lay the groundwork, the rest of your essays become much easier.

Still, writing 36 unique essays is no joke. I heard that one English teacher once told her class that college applications can be like an AP course. I say you should treat them like a part-time job: The copious amounts of time spent beating your essays to death will almost certainly add up to more than a single class.

Thankfully, there exist many free online resources that help with this process: College Essay Guy, CollegeVine and College Essay Advisors, for instance, helped me find the right tone in my first few essays and Grammarly made proofreading much easier.

Writing your essays without help in the form of feedback and editing is hard, and I advise against it. If your family is willing to hire a college counselor, do so before the summer leading into your senior year. If not, your teachers, parents and older siblings and friends are often willing to help. However, you should not let any of these people control your college application process; they are there to support you, not write your essays or determine your college list.

Above all, I learned it worked to have a strict schedule. Even as a chronic procrastinator, I found that it was well worth the effort to start early on the process — not only to give ideas time to develop, but also to develop a stronger idea of which colleges you actually want to go to. Since college is the stepping stone to the next phase of your life, you should put in the effort to learn about colleges’ programs and cultures instead of basing your decision on their ranking or the number of required supplemental essays.

Here are my recommendations:

Before summer: Visit a college or attend an online informational session

This is beneficial for two main reasons. Logistically, it helps with the “Why this school” supplemental essay: A qualitative account of why you enjoyed visiting a school is superior to — but does not exempt you from — scraping facts off a college’s website. More importantly, it helps you get a feel for college life and determine how well you fit on campus.

As former Falcon news editor Alex Wang said, though, touring multiple colleges is expensive and yields minimal benefit. Having already informally visited several colleges I applied to, I found it most beneficial to attend a few free virtual information sessions and learn about other colleges’ offerings and cultures from their websites and Quora. This process will vary significantly based on individual preference, so I recommend trying one of these options early on and deciding what works best for you.

June: Figure out the baseline

I compiled a spreadsheet of all of my colleges’ essay prompts as well as a list of activities or experiences I could write about. Pick four primary, non-overlapping topics and start writing (I picked my four topics after looking at the UC prompts).

Think of stories not on your resume, and thus not overlapping with your four core essays — a detailed anecdote from a vacation, a field trip or the time you picked a new hobby. Write all of your ideas down, and don’t get sucked into a particular topic too early.

Once you have an idea you’re satisfied with, start writing. I got stuck on parts of many essays, so I switched between them until I had rough drafts of my personal statement and core essays. These showed no trace of “good” — don’t worry if you don’t like your drafts either.

… or however many drafts you need to make it work. I also started to revise my other drafts and started on supplemental essays, including a “why our college” essay.

I wrote near-final drafts of my personal statement and core essays that I’d be happy submitting. I also finalized several of my supplemental essays.

October: Write activities/awards descriptions on a document or spreadsheet

Review the PDF previews carefully and start submitting your applications.

Congratulations! You’re more than ready to enter adulthood and begin your college journey. Sit back, relax and wait for decisions to roll in. You put in your full effort, so there’s nothing to regret. And don’t forget to let your teachers know how you did — if they had to teach you for a year and write recommendation letters for you, at least give them this small courtesy.