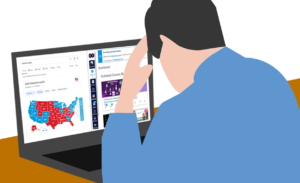 When senior Jason Chin scrolled through his social media feed on Nov. 3, he saw post after post of the election coverage, from Democrats posting about Biden’s success to memes about how slow Nevada was in counting votes. Having little interest in politics, he closed the app and rarely opened it for the next few days.

“There are people who really care about politics and post a lot of stuff about the election, but I’ve only been in the U.S. for four years, so my knowledge on American politics is very minimal,” Chin said. “I don’t want to be stressed out for something I don’t really care about.”

Despite his avoidance strategy, Chin noted that he still became slightly more engaged in politics this fall than he has been in the past. For general knowledge, he checked the status of the election twice a day.

Other students said they were deeply engaged in politics this fall but with the cost of feeling more stress. A Facebook survey of 47 students showed that approximately 91 percent experienced an increase in stress.

Senior Samuel Wong, who preferred Biden, said that he was particularly interested in this election because he will be eligible to vote in the next election, as will most current high school students.

“I felt anxious because the outcome was so uncertain. I was so used to knowing the results the day after the election, and it felt weird being left in a state of limbo for over 48 hours,” Wong said. In the days after Nov. 3, he had trouble concentrating in class because of the high-stakes election.

He said that this interest in the election was compounded by the many surprising aspects of the election, including Biden’s Pennsylvania comeback after a 700,000 vote deficit.

Like Chin and Wong, students had and observed mixed reactions over this year’s elections, particularly with regards to election legitimacy claims, presidential policies and propositions.

Election legitimacy questioned by some

This year, tens of millions of Americans voted by mail due to COVID-19. However, unauthorized ballot drop-boxes and the Trump’s administration’s attempt to restrict voting by mail by replacing postal service leadership have resulted in fear among liberals of voter suppression. For their part, many conservatives have supported the so far unproven allegations that that widespread fraud led to Biden’s decisive 306-232 win in the Electoral College and his 7 million vote lead in the overall vote.

Senior Tushar Shrivastav, who supported Trump, was one of those concerned about the legitimacy of the election. Although he disagreed with Trump’s repeated, unsubstantiated arguments alleging widespread voter fraud, he believes that dead people could have had a significant impact on the Pennsylvania election. This claim, like that on voter fraud generally, has not been proven in the courts or otherwise, according to FactCheck.

“Earlier this year, during the stimulus package, the federal government sent 1.1 million checks to deceased people,” Shrivastav said. “And it makes me question if they did the same with ballots.”

Left-leaning Wong, however, said that he is unconcerned about the legitimacy of the election despite Trump’s frequent false claims that the election was rigged.

“I think that's just Trump's personality; he doesn't like to lose,” Wong said. “Something that raised a red flag for me were some reports of ballots still not being mailed in by the USPS; I think we should definitely still count those votes, but as of now, I don't think that it will make a drastic difference.”

Although Trump’s claims of fraud ultimately failed to change the outcome of the election, Class of 2018 alumnus Kyle Wang, Stanford University sophomore and writer for the Stanford Politics newsmagazine, said that Trump’s unwillingness to accept results unnecessarily threw shade on the whole election process, which is conducted by local workers all over the nation.

“For me to cast doubt on the results would be to disrespect the work of countless poll workers whose labor has helped ensure that the elections could function smoothly,” he said.

During his tenure, Trump has appointed three conservative Supreme Court justices and 55 judges for the Courts of Appeals. He signed into law a major GOP-passed tax reform bill in 2017 and legislation that reduced sentences for some federal inmates. However, he tried — and failed — to pass a replacement for President Obama’s Affordable Care Act. What perhaps led to his losing the election was his inability to to address the COVID-19 pandemic.

“Since much of Trump's presidency was spent undoing Obama's accomplishments, I think we'll see a lot of reversals at the beginning of the Biden administration,” said Nair.

Wang was also interested in the laws each candidate would introduce. Although he voted in local elections, he said that he could not bring himself to vote for either candidate in the presidential election, as many of today’s issues would persist under either candidate. He pointed to Biden’s 1994 Crime Bill and its resulting over-policing of marginalized communities as well as the Democratic Party’s general rejection of the support of working-class voters.

“While I'm happy that Trump has been voted out, the broader injustices perpetrated by the U.S. were not unique to the Trump administration and will likely continue under Biden,” Wang said. “This is only the beginning — the fight for justice began long before Trump and will continue long after he leaves office.”

Sophomore Stuti Agarwal, too, was thankful that the Trump presidency was over; however, she was surprised by the results of the election and its implications on America.

“While I am so grateful that Biden won, I am still shocked to see that nearly 50 percent of the nation voted for a man who supports racism, homophobia, sexual assault, misogyny and fascism,” Agarwal said. “I would’ve thought that the past four years taught Americans something, but apparently it didn’t. In the end, if this election has shown me anything, it is that America needs a lot of fixing.”