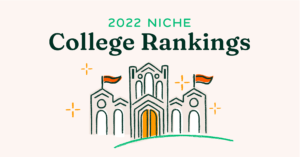 Sure, it sounds impressive, and as a Saratoga student, I should be proud of our rankings — but I’m not.

I wholeheartedly resent systems that dictate which schools are good and which are not. I take umbrage with websites that decide it’s acceptable to say a school is “inherently” better than another according to methods that have historically favored schools located in a wealthier zip code.

Niche claims to rank schools based on empirical data gathered through surveys both they and federal organizations conduct. However, a deeper look into their grade calculation reveals how flaky their system really is.

More than half of their criteria include “surveys from students and parents.” The kinds of students and parents that fill out surveys on sites like Niche likely belong to a community in which WiFi access is a given — communities that are often higher on the income spectrum.

Another significant factor in their evaluation is scores on standardized tests such as the Smarter Balanced Assessment Consortium (SBAC), SAT and ACT. Standardized tests have long been under fire for only evaluating one’s skill at taking standardized tests, which are more widely available to the more fortunate, since their parents can afford to spend money on training and tutors. Both of these criteria’s economic inequalities inherently lead to ranking disparities on these lists.

Furthermore, high school rankings don’t lead to anything productive. Colleges look at GPAs and essays — some look at test scores, but the number that do is dwindling. Rankings devalue work that students and teachers put in, as previous lists have displayed a pattern of ranking schools in wealthier communities higher.

No ranking will ever fully capture a school’s situation and fairly rank every factor contributing to a school’s atmosphere. Instead of ranking best to worst, websites like Niche should keep the current measurement metrics, but discard the ranking system. Rather, they should reward schools that perform, without creating a list that places other schools at the bottom — in other words, the website should focus more on positive reinforcement.

While it’s great to hear SHS is nationally renowned for its excellence, I don’t think it ultimately matters. Until the competitive and toxic ranking system is reworked, priding oneself on a flawed ranking is pointless.