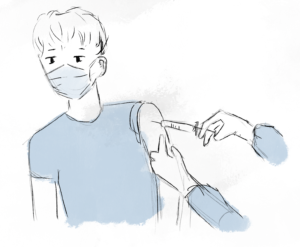 On Oct. 1, California became the first state to mandate COVID-19 vaccines for K-12 students learning in-person at both public and private schools, an order that could begin next fall after the Food and Drug Administration (FDA) approves a vaccine for children 12 and under. Gov. Newsom said students with medical concerns and other exemptions will be determined through a public process regulated by the California Department of Public Health (CDPH).

The mandate allows unvaccinated students to enroll in Independent Study, an at-home asynchronous learning program school districts were required to provide for the 2021-22 school year per Assembly Bill 130 of the California Department of Education, but prevents them from attending in-person school.

Since vaccine mandates have been announced, a few protests have arisen in schools throughout the state such as  the protest on Sept. 28 at the San Diego Unified School District Office and the protest at Stanislaus County Office of Education on Oct. 6.

In contrast, a small sampling of SHS students appears to support Newsom’s move.

According to a Google Form survey The Falcon conducted, 12 of 18 students are in favor of the mandate while six are not.

Some voiced their opinions via the Google Form. One student wrote “unless you have a specific health concern to not get a vaccine then you should absolutely do it because you’re risking the well-being of those around you — it’s immoral and selfish to not get vaccinated barring extraneous circumstances.” Another wrote, “hallelujah … my parents might loosen up about covid if everyone is vaxxed.”

Since the vaccine came out on Dec. 11, 2020, 185 million U.S. citizens, or 56.4 percent of the total U.S. population, have gotten fully vaccinated. At the same time, many vaccine protests, such as the one by community members at SHS on May 15 during the Safeway Vaccine Clinic, have occurred.

Regardless of the school population’s opinions, the school must abide by the vaccine mandate. As of right now, SHS already has a system in place for mandating other vaccinations. According to assistant principal Brian Thompson, every summer when students register for school they need to submit documents proving that they’ve been vaccinated against diseases such as tetanus, hepatitis B and chickenpox. Without vaccination confirmation, students aren’t allowed to pick up class materials and attend class.

As such, Thompson said incorporating the mandate into the school’s requirements will be an easy adjustment, adding “it’ll just be adding one more check box and one more piece of data for families to input.”

Thompson said over 400 families attended the school-hosted vaccine clinic in May, accounting for “a really large percentage of student turnout.”

Because he estimates that the majority of students are vaccinated, Thompson said that the upcoming vaccination mandate may only affect a few students at the school.

So far, the school has offered vaccination clinics in March, May and August and will be offering a clinic for booster shots on Oct. 17.

Junior Adam Xu, who received the COVID-19 vaccine at the school-hosted vaccination clinic, said the vaccine mandate is “especially beneficial” for students, who tend to transmit the virus at a higher rate.

“I think any uncertainty about the vaccine should have been well taken out by now,” Xu said. “It’s proven that this is currently a pandemic of the unvaccinated because the scientific proof is out there in terms of the efficacy of the vaccine.”

Similarly, senior Albert Ye, who received his vaccine in May, supports the mandate because he sees it as no different from other required vaccinations such as the tetanus shot.

“We’ve always had mandates like these, and there have been people who have been consistently opposed to these mandates,” Ye said. “And somehow people think that the COVID-19 vaccine is going to be so radically different from these other vaccines that we already have tried and true to work.”

Ye thinks that aside from medically-related reasons, there are no valid reasons for getting vaccinated as it’s “just an mRNA packet being put into your bloodstream.”

Additionally, for those who are uncomfortable with the mRNA technology of the Pfizer and Moderna vaccines, there are other COVID-19 vaccine options such as J&J and international vaccines that use more traditional methods, Ye said.

In contrast, sophomore Sarah Zhou, who also got vaccinated in May, said she is in support of vaccines but against a mandate requiring it. She said that although it is understandable to want everyone vaccinated amidst a pandemic, there are other ways to encourage people to get vaccinated rather than making it a requirement.

“Why would you mandate this to people who are uncomfortable getting vaccinated when their concerns are valid?” Zhou said. “It’s not like they believe there’s some chip in the vaccine or anything; they’re just hesitant because we still don’t know of any lasting long-term side effects since the vaccine has only been out for a year.”

While the COVID-19 vaccine mandate currently allows for medical exemptions, it also allows for personal belief exemptions such as religious or ideological reasons, as per the Health and Safety Code (HSC) 120338 requirements.

However, if the COVID-19 vaccine is incorporated as a bill to the existing list of 10 required immunizations, it wouldn’t allow for personal belief exemptions under Senate Bill 277 established in 2015 — a proposal Sen. Richard Pan of Sacramento, who chairs the Senate Health Committee, is already pushing for.