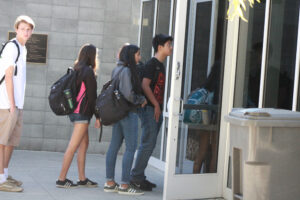 The line in English teacher Amy Keys’ class snaked around the room as students waited impatiently to sign out to go to other classrooms, the library or the student center during tutorial. Across campus, students are getting used to long lines to sign in and out of classrooms, one of the realities of the school’s newly enacted tutorial policy.

In the week leading up to the beginning of school, the administration announced that all students were required to be in a classroom supervised by a certified educator during tutorial and had to sign in and out of those classrooms. This is a change from previous years’ tutorial policy, which gave students the freedom to roam the school campus during the 35-minute period, seeking help as needed but also not being supervised.

Additionally, the cafeteria is only open during a 10-minute passing period at the end of the 25-minute supervised period, while previously it served food for all 35-minutes of tutorial.

Despite complaints from some students, principal Greg Louie said the district-mandated change was necessary.

Starting in 2007, the California Department of Education required that all public schools provide 64,800 minutes of instructional time and 180 days of school in total, or the school district would be in danger of the school year being extended and funding being cut. With the old tutorial policy, the school was not meeting the minimum number of minutes if tutorial had been seen as non-instructional minutes.

District superintendent Mike Grove, hired in the fall of 2018, was a leading voice in pointing out the danger that both SHS and Los Gatos High faced with unstructured tutorials and sought to make the change.

“Very often when new [district staff] come on board, they can look at it through the lens of other places they’ve worked and other people they’ve worked with,” assistant principal Brian Safine said.

Once Grove pointed out the problem, it decided to implement the policy that would impact normal school functioning the least, Louie said. Despite considering adding an eighth period, the district ultimately decided not to make any drastic schedule changes until a bell schedule committee can decide on an appropriate course later in the year.

“The superintendent was being wise about not making any sudden, big changes,” Louie said. “We decided to just make some small tweaks to tutorial like we’ve done, investigate it and then next year perhaps allow for something that will be sustained  for a longer period of time.”

Louie said some potential changes include moving tutorial to another part of the day, making it longer or splitting up the time within the schedule.

Starting this year, activities during tutorial must be “academically relevant” or “socially emotionally appropriate,” as well as supervised by a staff member. This has led teachers to change the way they run tutorial. Keys has seen pros and cons to the policy.

She said she has found the sign-in policy helpful because it slows students down as they walk into the classroom, allowing her to ask them what they need and then grouping students together in various study sessions depending on the help they require.

However, she said that now that students have to be sequestered in classrooms and other supervised areas, she has noticed a significant rise in the number of people who use their phones for social media or to play games, which she said is not “so socially and emotionally appropriate.”

“It’s not necessarily a bad thing because seeing students on their phones so up close gives us an opportunity to have a conversation about its effects,” Keys said, “but then I’ll have to get distracted if I’m working with a group of students on an assignment and say, ‘What are you doing? How can you use this time to be productive or engage with other people?’”

Another problem the new tutorial policy poses is the decreased amount of time to buy food. According to Louie, in order to counter this issue, the school is planning to put more vending machines on campus so students can buy food throughout the day, similar to the ones currently in the student center and the cafeteria.

Although these new changes may have surprised both students and staff at first, the administration is working on ensuring that tutorial is as useful as possible while adhering to state law.

“This can help enact a change that I think will ultimately benefit students and keep us in compliance with what the state requires,” Safine said.