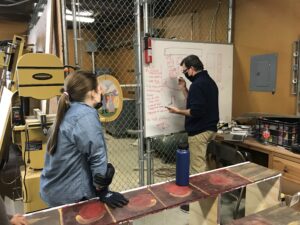 Permalink
Students work on designing and building a Shakespearean-style set, props and costumes.

A steady stream of cheerful chatter and the low hum of machines sound through the workshop located behind the science building. The scent of wood fills the room as stage tech students bustle around sawing, drilling and assembling planks of wood to create set pieces for the fall play “A Midsummer Night’s Dream,” which will be performed on Nov. 12-13 and Nov. 18-20.

While the drama club has traditionally been responsible for designing and creating the set for previous fall plays, this year, due to high student interest in the crafting aspects of stage preparation, the school is offering technical theater as an official semester-long course. Students learn to handle the set, props and costumes for drama productions.

Currently, 13 students are enrolled in the class to prepare for performances including the fall play, the spring musical, a New Works festival in May and a sketch comedy night fundraiser. Volunteers not registered in the course also help with the work.

Unlike other classes, technical theater is recognized as an 8th-period class to allow for scheduling flexibility outside of school hours. In order to meet the minimum mandatory instructional hours, stage tech members attend class as well as optional sessions outside class and log the “hours” they spend working to receive course credits.

“We do meet one consistent time a week, from four to six on Wednesdays,” drama director Benjamin Brotzman said. “That gets us about 35 of the 66 hours we need. The other time is covered by working outside of class on projects and tasks to run the technical aspect of the show.”

Although Brotzman teaches the class, adult leaders Nicholas Friend and Cathie Thermond also guide and supervise students when they attend workshop sessions on Tuesdays, Thursdays and Saturdays in the weeks leading up to the fall play. Friend oversees the engineering and construction of the set, while Thermond leads students in costume design.

On top of designing the Shakespearean set, props and costumes, stage tech students are also responsible for coordinating the light and sound systems of  the McAfee stage and applying stage makeup for performers. During the week of the show, students will work front of house by selling tickets, scanning e-tickets and ushering the audience into their seats.

“They’re getting real-life experience doing building, costuming and actually working on the play itself,” Brotzman said. “Instead of a sit down, instructional kind of class, [stage tech] is  more of a hands-on experience to create physical things.”

At the start of each class, Brotzman compiles a list of tasks students need to complete. The students then volunteer for roles accordingly.

Due to the physical nature of working with wood and tools such as hammers, screwdrivers, panel saws, staple guns and sanders, students wear gloves to protect from cuts and splinters as well as safety goggles and face shields to prevent sawdust from entering their eyes.

Brotzman said he believes that students gain engineering skills through the process of taking brainstormed ideas on paper to final, tangible products. They learn to focus on details and think as customers in order to design pieces to fit their standards.

According to senior set designer Leslie Robinson, the team is currently constructing the basic building blocks of the set, which consists of three platforms raised 30, 40 and 50 inches off the stage with stairs and ladders connected.

They are also creating four “flats,” which are decorated walls used for switching background scenery throughout the play. Stage tech students plan on painting canvases stretched over wooden frames with scenes of forests and Greek pillars to complement the Athenian setting of “A Midsummer’s Night Dream.”

For props, students are creating scrolls by attaching muslin to sticks of wood, sophomore stage manager Arushi Maheshwar said. In addition, teams are making vine decorations that will be plastered all over the McAfee Center to immerse the audience into the lush jungle-like setting.

“I feel like our work is influenced by Shakespeare, especially because our props and costumes are in a very Elizabethan style,” Maheshwar said. “Usually, the play is lighthearted and comedic, but Mr. Brotzman is taking a bit more of a darker touch on it to make it more mysterious.“

While set design takes place in the workshop, students sew and alter time-period costumes across campus in hallway storage rooms. After the set, props and costumes are completed, students will “load in” their work into the McAfee. From there, the class will begin working on light and sound logistics by hanging and focusing lights on the stage and learning how to record and edit sound effects.

Students actively involved in both technical theater and drama often struggle to find time to show up to work sessions due to conflicts between acting rehearsals and workshop hours in the busy rush leading up to the performance date. Maheshwar is one student facing these challenges.

“It’s always a time crunch,” she said. “I’m excited for the play, but also a little bit stressed.”

Nevertheless, Robinson believes that technical theater has made considerable progress and is on track for its performance. For both students, the class’s friendly environment, the satisfaction of preparing for the show and the skills they gain ultimately contribute to an enjoyable experience.

“I love the behind-the-scenes aspect of theater and seeing what adds up to a final show,” Maheshwar said. “I really feel like tech theater is a place where I belong and it is something I really love to do.”