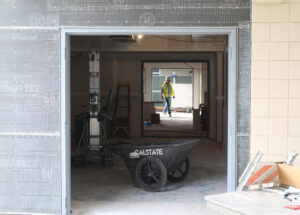 Workers are putting the final touches on the new student center.

The opening of the new student center in the 800 wing was supposed to be done when students returned to school in early January. But because of rain and other delays, the center is now more likely to open in late February.

Though principal Paul Robinson had hoped for the building to open on Jan. 21, he said that the best course of action is to finish the final parts of construction and move in ASB materials and CASSY counselors during the weeklong break that starts on Feb. 18.

“There are no students [at school during the break],” Robinson said. “We can just take that week so we don't have to worry about disturbing all the classrooms around us with all the noise of moving.”

With the focus shifting away from the new student center as the construction comes to a close, the administration is looking ahead to other remodeling projects that will be funded by the Measure E bond that voters approved in 2014.

For instance, reconfiguring the 900 wing has been high on the list of priorities. By revamping the building, which currently houses the robotics work space and other storage areas, the school hopes to create two more science classrooms.

The administration also anticipates moving the robotics room to another area in the 900 building. The new location would allow for better outdoor access to the back parking lot, ideally helping with the transportation of robots and the materials used to build them.

“Any renovation, I’d say, the club would be grateful for,” said senior Graham Kingston, the team’s design lead. “We’re excited to see the club get a little more formal. It would be nice to see it more incorporated.”

In addition to a revamped 900 wing, the ceramics room is still being repaired from the kiln that occurred during the last school year. However, since the plans aren’t part of the Measure E budget, the school is yet to decide when the all renovations will be finished.

The school also plans to remodel some of the bathrooms on campus.

One of the biggest projects on the docket is the remodeling of the administration building, which has not been modernized since its construction in 1960. $2 million has been set aside to redo the lights and reconfigure office space for students to have easier access to the health and guidance counselors’ offices, among other upgrades. At this point, it’s not clear when this project would start.

In the years since the bond was improved, some projects have been added to the remodeling list, while others have been dropped .

The administration, along with a Measure E planning group from 2014 and some of its newer members, have had “reprioritization meetings.” “We want to make sure that those are the projects that people really feel the school needs so before we run out of money completely,” Robinson said.

One project that didn’t work out was the construction of a third gym/multipurpose room in the area where the team room training room now sits. Experts told the administration a larger footprint was needed to build a structure of that scale.

With this large building cut out of the plans, Robinson estimates roughly $16 million to $17 million remain of the original $44 million Measure E funds for the work ahead.

“I think we’ve had a really good reassessment of where we’re at,” Robinson said. “Now in this next phase we’re just waiting for the (school) board to give us the go-ahead so we can go hammer out the projects we really want to do.”