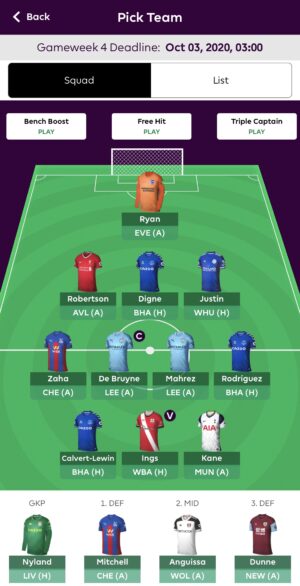 As tens of millions of Americans spend hours upon hours drafting and analyzing their fantasy football teams, the exact same situation is occurring across the Atlantic Ocean — in England, a new season of fantasy soccer is beginning.

Of course, fantasy soccer leagues exist for almost every country in Europe, but the English Premier League (EPL) holds the most prestige and is regarded as the most competitive and popular league in the world.

Fantasy soccer is unique in that there isn’t a draft — rather, each player is given a price tag, and participants use their 100-pound budget to build the strongest team possible. Similar to the sport itself, there are plenty of formations to choose from, but top participants often go with a 3-5-2 or a 3-4-3, the number of defenders, midfielders and forwards, respectively.

Scoring is based on many measures from real-life performances. Goalkeepers and defenders are awarded for clean sheets or conceding fewer goals, while midfielders and forwards provide points through goals and assists. Bonus points go to the top three performing players in every match, and players can choose a “captain” every week whose points will be doubled.

As a result, the general rule of thumb is to allocate most of your money on five or six attacking midfielders, wingers or strikers who will deliver consistent goals and assists. The rest of the team should feature so-called budget players, who are cheaper but still relatively solid.

The first players who come to mind are Manchester City’s Kevin de Bruyne or Liverpool’s Mohamed Salah, and while they’re two of the most expensive players on the market — they cost  11.5 and 12 pounds, respectively — having a dependable captain is key to consistency. Tottenham Hotspur duo Harry Kane and Heung-min Son, Arsenal captain Pierre-Emerick Aubameyang and the 2019-2020 Golden Boot winner Jamie Vardy are other smart options to build a team around.

Players may not perform as well as participants predict, so participants are allowed one free transfer every week. You can also play a wildcard chip once throughout the season to completely reset your entire team.

Still, you can’t just transfer in the most in-form players every week. Prices fluctuate based on a player’s popularity in the market; after scoring a hat-trick, Everton striker Dominic Calvert-Lewin’s price soared from 7.0 to 7.3 pounds as hundreds of thousands of participants flocked to the in-form goalscorer.

What makes fantasy soccer so intriguing is its uncertainty. An injury or suspension can completely derail all your progress, especially when players return negative points or are sidelined for several weeks at once.

Heading into the 2020-21 season, there have been many notable changes from the past, mostly due to COVID-19. Without fans, home and away game advantages have practically been eliminated, and the league itself is missing key riveting rivalries between opposing players and fans.

That’s not to say that this season won’t be just as exciting as in previous years. Competitiveness in the EPL is at an all time high — even bottom-table teams can give the best teams a run for their money.

Specifically, in just the second week of the season, a record-breaking 44 goals were scored in only 10 games, and fans should continue to expect an abundance of goals each game.

Apart from the traditional Top Six teams, many players have gone underappreciated at smaller clubs, including the likes of Crystal Palace winger Wilfried Zaha and Southampton’s target-man Danny Ings. It’s not a surprise that their meteoric rises have caused their popularity and market value to skyrocket, and it’s safe to say that there will be plenty of new talents to choose from this year.

Fantasy soccer may seem like a simple managerial game, but with the clouds of uncertainty coming into the new Premier League season, this will definitely be a memorable experience for all who play it.