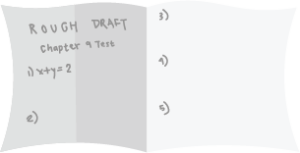 Permalink
This new system would not only worsen existing grade inflation but also disincentivize proper learning habits — a skill required for standardized testing.

With in-person learning beginning to resemble what school looked like before the pandemic, it would be expected that testing would revert to normal, closed-book testing.

Several math teachers in AP Calculus AB and AP Statistics, however, are now adopting a rough/final draft system for tests in order to ease the transition between remote and in-person learning. Students complete a “rough draft” of their test in class for participation credit, and have the opportunity to revise this version at home in an open-book, open-note system and later turn in that “final draft” for test credit.

While such a system may appear to be helpful to students already stressed out with other classes and extracurriculars, it diminishes the primary objective of academic classes: to teach students to absorb the knowledge taught in class and independently apply that content in a testing environment.

Last year in remote learning, it was common knowledge that cheating was extremely prevalent. The rough/final draft policy intends to help level the playing field between hybrid and remote students. This line of thinking, however, raises an important question: How long will the era of remote testing continue to affect in-person education? In particular, are we never going to have proper, closed-book in-person examinations as we did before the pandemic?

Clearly, this is unfair to the students in other AP-level classes who are under stricter test policies. These students are forced to work much harder in order to achieve the same or lower scores as students in classes that use the rough/final draft format. In addition, they may feel discouraged after putting in hours of effort only to see their peers easily achieve equal or higher scores.

This contrast becomes more pronounced when the same course is taught by a teacher who uses the rough/final draft test format and another one who doesn’t. Students taking the rough/final draft versions of the tests may have higher grades than those taking closed-book tests, even if they don’t understand the material as well.

Throughout the school year, they are given the opportunity to absorb the material through the help of teachers, classmates, assignments, projects, labs and textbooks. The purpose of a closed-book test is to encourage students to take responsibility for their own learning and make sure that they know the material themselves. This is especially important in AP classes, where students must reflect this knowledge without any external aid in a nationwide standardized exam in May.

By relaxing the usual standards of testing, teachers are inadvertently creating an atmosphere where students may feel comfortable slacking off or postponing their studying until their AP exams at the end of the year. Without a cumulative and definitive final, these teachers should be especially concerned with how their students will retain all of the information taught from August to May.

In particular, if the rough/final draft system incentivizes students to cram all the knowledge in a short amount of time, they will not have achieved the requisite mastery of the subject material that harder courses require.

By being allowed to slack off now, students may find that their entire learning trajectory has been slowed down. Even if they took an AP course in high school, they may even need to retake it as an introductory, first-year college course if they do not pass the exam or demonstrate a sufficient mastery of the material.

Furthermore, many of the topics in classes such as AP Calculus AB and AP Statistics are fundamental concepts that are used throughout higher studies of math and science. For example, most natural sciences use many statistics to analyze data collected from experiments. Additionally, students require a solid understanding of calculus to progress in math and physics in many technical college majors.

While many students scored high on the actual AP exams despite tests during online learning being open-book, many AP tests were digital last year, which still allowed room for cheating. With the College Board tentatively planning on hosting the tests entirely in person this year, students need to solidify their knowledge and be prepared for the usual rigorous closed-book tests. The rough/final draft system could result in students not fully benefiting from the class’s content and earning lower AP scores in May.

Despite these risks, some teachers believe that by reducing the stress and pressure of exams, students will be able to appreciate the subject more and learn for the sake of learning itself. Unfortunately, due to the massive amounts of work that students are regularly faced with, most are rarely able to take the time out of their days to explore a subject in-depth. Often, learning those subjects is a last priority for students, and they are not able to delegate a sufficient amount of time to the class. Hence the new testing format itself does nothing to actually enhance the learning experience for these students.

Additionally, by setting standards where students can score higher on tests more easily, teachers run the risk of having massive grade inflation in their classes. Especially for AP classes, traditional grading is meant to distinguish students by the level of effort they put into learning the material. However, with the rough/final draft format of tests, the grade difference between lazy and studious students has become negligible.

Traditional closed-book tests were originally implemented to test students on their application of the knowledge they were supposed to have learned. By contrast, the rough/final format forgoes this and removes incentive for studying. In order to preserve fair grading and ensure that students are learning the material of the class, closed-book tests should once again be the standard in all classes.