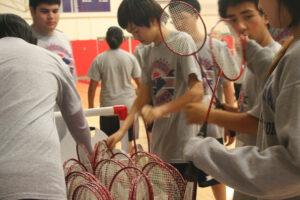 Freshmen in a typical P.E. class

After a 12-week season, freshman JV tennis player Priyanka Arunkumar was looking forward to a nice, relaxing break. To her surprise, she found out that she only had two weeks until she would have to go to a sports P.E. class to complete her semester requirement for physical education.

Starting this year, all freshmen must go back to sports P.E. after they are done with a sport. This new requirement does not affect any of the current sophomores. Previously, once freshmen finished their season, they got the rest of the semester off without a seventh period. However, they now must immediately join a seventh-period sports P.E. class after their season is over.

Physical education teacher Yuko Aoki said this new rule has been established because the school is below state requirements for P.E.
However, many freshmen think the change is unreasonable.

Said Arunkumar, “I think it’s unfair because none of the classes before us had to do this and now we just get stuck with it.”

Others are indifferent to the change.

“I really don’t care,” said freshman Anika Jhalani. “I mean, it would have been nice have a break, but I guess to get full credit we need to attend sports P.E.”

Besides the generally negative reaction to the requirement, many freshmen still remain confused as to when and why they have to join the seventh-period sports P.E.

“I’m still really confused about the whole thing in general,” said Jhalani. “All the sports end on different days, so it’s so hard for all the freshmen to know what’s really going on.”

Between the 130 students who have concluded their season and the students going out for the upcoming sports, P.E. teachers have been struggling to keep track with the students’ schedules.

“It’s been really tough trying to coordinate the end of sports seasons with the P.E. classes,” said assistant principal Joe Bosco. “With all these students going in and out, it’s been tough on the P.E. teachers.”

The freshmen now have around two weeks between the end of their season and when they must begin P.E. Currently, all fall athletes who are not participating in a winter sport, will be enrolled in the Sports P.E. class by Nov. 17. Each day missed will be considered a cut.