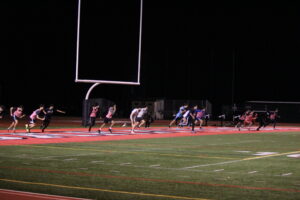 The soccer team warms up for practice by doing drills on the lower field.

When sophomore Nash Wu arrived at school for soccer tryouts on March 1, the first day of the season, he was surprised at how similar everything was to last year.

“I was expecting [the tryout session] to be different from last year because of the pandemic,” Wu said. “But there was nothing different except that we now have to wear masks.”

The team’s new coach, Max Dorling, said he was excited to be able to coach the soccer team this year even amid the pandemic.

“In a time like this, simple things like a high school soccer season can be great to boost morale and get back to a sense of normalcy,” he said. “It is good to be back out there.”

As a new coach for the team, Dorling, a graduate of the school, said he hopes to make the players proud and excited about high school soccer.

“I just want them all to have fun playing soccer again and be proud to play for the school,” Dorling said. “When I attended SHS 10 years ago, we had immense pride in our soccer program and I want to instill that in the program again.”

Dorling also hopes to implement his own philosophies into the team to improve the players’ skills and techniques. Although he says this will involve a lot of “tactical walkthroughs and drills to get them into a new flow,” he believes this will be beneficial in terms of improvement.

For his part, Wu said Dorling has already made an impact on the team, even in a short time.

“I like the way he motivates us to keep on improving,” Wu said. “His drills are also really useful and have helped me get back in shape.”

Because of COVID-19 and low participation, however, there will only be one team for the entire season instead of the typical JV-varsity split.

Despite the short season and unusual circumstances, Wu is glad that he was able to make the team, get some exercise and be away from screens for a few hours every day.

“Returning to the season was exciting and it felt normal for once,” Wu said. “Although it takes up a lot of my time, I’m glad I’m getting the chance to exercise and play soccer again.”