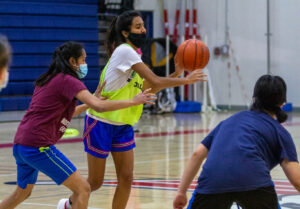 Leading up to the season, the girls’ basketball team had to figure out a way to stay in shape, continue to practice and get acquainted with new coach Jaclyn Brode after longtime coach Danny Wallace resigned the position. Over the summer, they held preseason workouts three times a week, focusing on both upper and lower body strength.

As safety regulations relaxed, the preseason workouts morphed into in-person practices on the school’s outdoor courts, eventually moving indoors. For the girls on the team, this marked the first time since quarantine that they were able to practice important skills, such as shooting and dribbling. To stay in shape and retain fitness, the team also ran on the school’s outdoor track.

Brode believes that the pandemic-related restrictions have taken a toll on the team’s ability to practice effectively, despite the Zoom workouts and outdoor practices.

“It’s been like trying to learn the game with our pants on fire,” Brode said.

The season started on April 20, and the girls’ fitness and skills have been put to the test; the team has already played eight games. They have a record of 3-5 as of May 14, with wins against Wilcox and Santa Clara and losses to Palo Alto, Los Altos and Los Gatos. They are scheduled to play 14 regular season games.

Brode remains optimistic for the rest of the season, despite a rough start. She said the team’s biggest strength is their resilience in facing various challenges; for example, the team has fewer substitutes than usual and is not able to practice as often or efficiently due to pandemic restrictions.

“Many of these girls play full games without ever getting a rest,” Brode said. “They have not given up no matter how tired they are.”

Brode emphasizes defense and effort in her coaching style, and said she has seen drastic improvements in players’ transition defense, closeouts and rotations since the beginning of the season.

The team’s goal, according to Brode, is to build up skills and habits that will make winning a product of their hard work and dedication to the sport. Brode’s expectation is that the team is self-disciplined, “pours into their teammates” and competes with a hearty spirit.

The team plays the same opponent twice a week and often sees an improvement in the score the second time around, which Brode interprets as a good sign.

Practices have changed from a typical year, however. While the team would often play scrimmages so athletes could practice reading the defense and making quick decisions, the team’s lack of their traditional off-season open gym training has made this much harder to do.

Despite the challenges, however, Brode believes that the team has made many strides in progress and are constantly improving together.

“We challenge [athletes] on a daily basis to be better than they were the minute prior,” Brode said. “From game to game, we are getting better.”