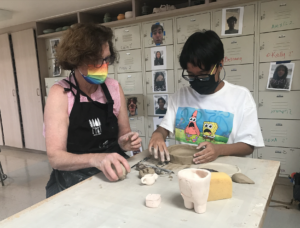 Permalink
Ceramics and Media Arts teacher Theresa Muñoz had a love for art and teaching since childhood but was not able to pursue those passions until schools stopped firing lesbian teachers.

Ceramics and Media Arts teacher Theresa Muñoz — who identifies by no pronouns — first made art as a baby, when Muñoz’s dad put wet paint on a table and let Muñoz play with it. Rather than telling Muñoz how to do it and what was wrong or right, Muñoz’s parents gave Muñoz the freedom to do anything with the paint.

“Art was one of the things my parents never told me how to do, and so I just found my avenue right there,” Muñoz said. “I just wanted to create things.”

Muñoz was born in San Jose and grew up in Los Altos. Aside from spending seven years on the East Coast, Muñoz has always lived in Silicon Valley.

“All kinds of different people have come from all over the world and created a really multicultural society in Silicon Valley that I love,” Muñoz said.

Just like art, Muñoz discovered a love of teaching at a young age. As the second oldest child, Muñoz often taught Muñoz’s younger siblings simple things like how to speak, walk and “climb on top of the refrigerator to reach the cookie jar.”

In elementary school, Muñoz read books to little children at the local library and helped out at a program for developmentally disabled children. It was there that Muñoz found interaction and introducing fun elements to students were the best forms of teaching.

“I learned really quickly that if you listen and are curious, and you have some joy, and you play along with any type of human or animal, they will learn and you will learn,” Muñoz said.

Muñoz described teaching as a puzzle that has to be figured out individually per student, since each has a unique way of learning. Muñoz always found it easy to solve these puzzles, a significant factor that drew Muñoz to teaching.

Apart from teaching, Muñoz loves learning. Muñoz went to St. Francis High and went on to study at Foothill College, Harvard University and Stanford University. However, Muñoz faced barriers throughout her years in educations due to her sexuality — at the age of about 16, Muñoz came out as lesbian.

“There were certain prejudices in the schools that I went through that I found very hard,” Muñoz said. “I didn’t know what to call it, but I knew I wasn’t regular.”

Due to the lack of civil rights at the time, lesbians could not pursue teaching careers, so Muñoz was forced to follow a different career path until societal norms changed. As a result, Muñoz started a house design and remodeling business during the earlier parts of her career.

Later on, these restrictions dissolved as queer rights began to be acknowledged. When Muñoz’s dad began developing Alzheimer’s disease, Muñoz switched to substitute teaching to spend more time with him. It was then that Muñoz was able to rediscover that childhood love for teaching, and Muñoz went on to San Jose State to gain a teaching credential after.

So far, Muñoz has taught high school for 7 years: Before Saratoga High, Muñoz taught six classes at Emery High, including AP Art, Beginning Art and Advanced Painting. At SHS this year, Muñoz is teaching Ceramics and Media Arts as the 11th-grade media teacher.

Muñoz has worked with computers for decades and remembers seeing Muñoz’s dad using them when they were first made. However, Muñoz believes that hands-on art is the rawest form of art since it is a craft born at the dawn of civilization.

“I really believe that art happens from infancy and it happens with your body,” Muñoz said. “Painting and sculpting with your limbs does something that helps your brain develop a certain way that sitting at a computer doesn’t.”

Muñoz has liked the dynamic of teaching both Ceramics and Media Arts so far. The message the teacher wants to convey most to students is to be kind and to create a lot of artwork — Muñoz added that redoing a piece four times is better than doing it just once.

Outside of school, Muñoz enjoys spending time in the water — recently, Muñoz kayaked from the Golden Gate Bridge to the Bay Bridge. Muñoz also just learned how to acrylic dip nails and is a super fan of Norwegian murder mysteries. But no matter what Muñoz is doing, Muñoz’s key motto is to spend time being in the moment.

“When all else fails, just look where your feet are right now and who you’re with, and be there,” Muñoz said.