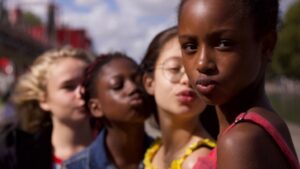 The film is receiving backlash for the sexualization of young girls and misrepresentation of Islam.

“Amy, 11, becomes fascinated with a twerking dance crew. Hoping to join them, she starts to explore her femininity, defying her family’s traditions.”

On Aug. 20, Netflix released this synopsis, along with the promotional picture and trailer for a new movie called “Cuties.” The coming-of-age film describes a young Senegalese immigrant, Amy, who needs to decide between two contrasting worlds: a traditional Senegalese, Islamic lifestyle, or a free-spirited dance crew.

Immediately after the trailer’s release, controversy over the sexualization of young girls and misrepresentation of Islam arose. The description has since been changed to “Eleven-year-old Amy starts to rebel against her conservative family’s traditions when she becomes fascinated with a free-spirited dance crew," but Netflix continues to face backlash.

A change.org petition has garnered 323,458 signatures to remove “Cuties” from Netflix. The petition states that the show is “disgusting” as it sexualizes an 11-year-old for the viewing pleasure of pedophiles.

The petition refers to the original Netflix promotional poster, which depicts four young girls posing “provocatively.” This image was taken down by Netflix, which said the poster was “inappropriate” and “not a good representation of the show.”

Typical of reactions to the film was junior Alyson Van, who said: “Just the promotional image alone is enough to promote pedophilia. It sexualizes these young girls which is so unacceptable, especially because children will probably watch the film and be heavily influenced by it.”

Although the promotional picture has been removed, the petition description has been updated to state that “this problem isn’t the artwork, it's the fact it's about twerking eleven-year-olds for adult viewing pleasure.”

The film is rated TV-MA on Netflix, meaning that it is not suitable for anyone under 17. The main actress, Fathia Youssouf, however, is just 14 and the film is available for anyone of any age to watch on Netflix. Regardless of the rating, critics believe that the film will heavily influence the children who watch it.

The movie has also been accused of promoting anti-Muslim sentiment by perpetuating the stereotype that all Muslim girls are oppressed.

Junior Sarah Khokhar, who is Muslim, said she was disturbed with the movie’s take on Islam. “This show affects me deeply in seeing my religion, my identity, being portrayed in such a negative light,” she said. “Netflix labeling the Muslim family as ‘conservative’ was even more harmful.”

Khokar said that in Islam, women are supposed to be respected and have the right to own their own income, their husband’s income and their own inheritance. Khokhar said the show may influence Muslim girls into believing that they are limited by their culture and it portrays the stereotypical storyline of an oppressed Muslim girl who abandons her religion to be free.

“Whenever Islam is talked about in the media, it’s always portrayed as oppressive and that it’s connected to terrorism,” Khokar said. “Especially for young Muslims like me, it hurts our mental health.”

She added she hasn’t seen a full and accurate depiction of the religion yet. According to a Time article, the writer and director of the show, Maïmouna Doucouré, stands by the film. She told the magazine that her inspiration for producing it stemmed from her personal childhood experience and that the film is not trying to generalize all Muslim families.

“I’ve often asked myself questions about my own femininity, about evolving between two cultures, about my Senegalese culture which comes from my parents and my western culture,” Doucouré said.

She got her inspiration for the film when seeing young girls dancing in a sexually suggestive manner at an amateur talent show.

“I asked myself if these young girls understood what they were doing,” Doucouré said. “Today, the sexier and the more objectified a woman is, the more value she has in the eyes of social media. And when you’re 11, you don’t really understand all these mechanisms, but you tend to mimic, to do the same thing as others in order to get a similar result. I think it is urgent that we talk about it.”

Despite all the controversy, “Cuties” is still set to release on Sept. 9 on Netflix.

For her part, Khokhar hopes the public shuns it.