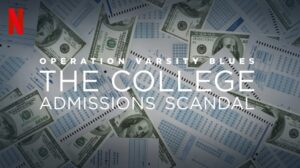 In March 2019, Operation Varsity Blues — the code name for an investigation of illegal college admissions involving more than 50 high-profile people — went public. After months of wiretapped phone calls and investigations by the FBI, the bribery-based scandal laid bare the money and corruption of the college admissions process, much of it involving bogus sports participation and cheating on tests like the SAT.

“Operation Varsity Blues: The College Admissions Scandal” focuses on the villain behind it all:  William Rick Singer, a private college counselor who orchestrated the entire endeavor, and the wrongful actions he and his affluent clients took to gain admission to prestigious universities such as USC.

The film transitions between real footage of interviews and paparazzi footage, complemented with actors’ portrayals of key moments. Each phone call in the film uses a transcript of real recorded discussions, which adds to the authenticity of the viewing experience.

The documentary opens by introducing Singer through a series of interviews with several of his peers and acquaintances. It then transitions to his interactions with each of his clients, including actresses Lori Loughlin and Felicity Huffman, as well as Hercules Capital CEO Manuel Henriquez.

The main focus of the documentary is on Singer’s creation of a side door to college admissions. He refers to the regular admissions process as the front door, the donations process as the “back door” and his form of direct bribery to college athletics coaches as the “side door.” It operates through parents paying a sum of money to Singer and other college recruiters in exchange for their children’s guaranteed admission.

While both the back door and the side door require a significant amount of additional payment, the amount of money involved with the “side door” is far less (hundreds of thousands of dollars vs. millions of dollars), and it is a guarantee of admission rather than just offering an advantage.

The documentary introduces the side door idea through multiple phone calls between Singer and his clients. These calls emphasize the uncertainty of the parents but also the blatant corruption of the process, highlighted by the casual language the people involved often used when talking about committing federal crimes.

These phone calls are artfully interweaved with interviews of real people, including that of former Stanford sailing coach John Vandemoer. Powerful anecdotes drive the best parts of the documentary.

Phone calls of actual conversations between Singer and his clients are also performed by actors, which makes the film even more dramatic and suspenseful. Amazingly, some of these scenes are even acted out by the people involved in the scandal.

Along with the captivating plot of the documentary, the questions it presents are intriguing as well. Seeing how many well-respected and well-known people stooped to such dishonest and illegal means to get their children into elite colleges only reinforces the idea that wealth and power can easily lead to corruption.

Additionally, the documentary highlights both the unfairness and the societal acceptance of getting into college through large donations. When students get into a top college because their parents donate millions of dollars to it, few bat an eye or call it corrupt; similar thinking fueled Singer’s “side door” hustle, which was completely illegal.

The film also did a spectacular job of clarifying that while the parents involved knew exactly what they were doing, they sheltered their children from the scandal in fear of disapproval. The documentary even reveals specific phone calls where parents outright admit that they want to fake their child’s test score, but don’t want their children to find out.

The tasteful production and realistic acting in the film make the documentary a suspenseful and thought-provoking watch. For a student body overwhelmingly concerned with achieving admission to prestigious universities, “Operation Varsity Blues: The College Admissions Scandal” reveals the ugly truth behind getting into some of America’s most desired schools.