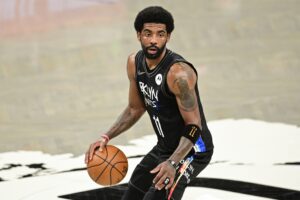 Kyrie Irving will be forced to sit out in all games due to Nets ruling.

Permalink
While the Nets have taken the step to ban Irving from play, the NBA should extend mandates to all players and staff.

On Oct. 13, the Brooklyn Nets announced their decision to ban star point guard Kyrie Irving from playing after he revealed he had not yet gotten the vaccine. New York mandates require proof of vaccination for those 12 and above for large indoor events, meaning he will not be eligible to play in home games as an unvaccinated person.

This decision was met with irritation from some, and reluctant acceptance from others. General manager Sean Marks was displeased with Irving’s decision, while teammate James Harden expressed his desire for Irving to receive the vaccine. In addition, for every game Irving misses, he will forfeit $380,000 in his salary.

“The franchise’s collective patience will be increasingly tested the longer that Irving stops short of committing to join the team on a full-time basis,” Marks said in a statement.

It must be made clear, however, that it is not league mandates that are banning Irving from play — instead it is the Nets’ decision combined with New York City regulations that have taken away his eligibility.

With this in mind, it is in the NBA’s best interest to require player and staff vaccinations for all games, home or away. Currently, each team’s vaccination requirements depend on the city where they are based. While the NBA has taken positive steps by pushing Warriors guard Andrew Wiggins to get vaccinated when he had initially refused, it’s not enough. A league regulation would reduce confusion, make games more efficient and safe, and maintain competitive balance among teams.

However, games are not the only situation in which an infected player could transmit the disease. Early in the pandemic, when the severity of the situation was not fully understood, Utah Jazz center Rudy Gobert caused controversy when he jokingly touched every microphone during a post game interview. Later, he was diagnosed with having COVID-19, and was suspected to have spread it to teammate Donovan Mitchell. Although not all players would act so irresponsibly, prohibiting unvaccinated players from competing creates a safer and more cautious environment.

Along with the players, other members of the franchise such as personal trainers and managers are also at risk in the presence of unvaccinated athletes. A primary concern for every team should be their head coaches: Many older staff members, such as 72-year-old Spurs coach Greg Popovich, are at high risk according to the CDC because of their age. To protect those who are more at risk from the virus, these franchises should be sure they have a high vaccination rate among both players and staff.

While the primary effort should be to get all players vaccinated, an alternate option could also be to require unvaccinated athletes to be tested before and after every game. Although there is the possibility of false negatives, the frequency of tests performed would prevent the positive results from going unnoticed. If there is a positive case, the league could quickly test both teams that were involved. While imperfect, this solution has the benefit of both allowing unvaccinated players to play while keeping the league safe.

Whether in home or away games, players who are untested and unvaccinated should not be allowed to play. Just as Irving was banned from play, unvaccinated players around the league should stay away from the court unless they are willing to undergo rigorous testing. This proactive plan permits all players to see playing time despite vaccination status, and would allow the league to maximize profits while maintaining safety at the same time.