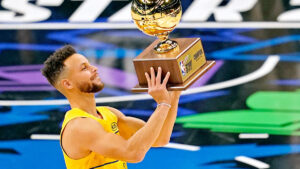 The 3-point contest that Curry won was part of the NBA’s annual All-Star weekend in Atlanta, a chance for the league’s top players to showcase their abilities and interact with fellow players and celebrities. The events, consisting of a Rising Stars game, Celebrity game, skills challenge, 3-point shootout, dunk contest and the main All-Star Game are instrumental in growing the NBA’s global brand and introducing the game to new fans.

The highlight of the day, as always, was the game, which featured the best players of the season as decided by fans, coaches and media.

Kevin Durant and LeBron James, who received the most fan votes from the Eastern and Western conferences, respectively, captained the two all-star teams and drafted their rosters from the pool of all-stars. Durant, however, didn’t play due to a left hamstring injury.

Rising stars Zion Williamson of the New Orleans Pelicans, Zach LaVine of the Chicago Bulls, Julius Randle of the New York Knicks and Jaylen Brown of the Boston Celtics made their first all-star appearances. Conley played as an injury replacement. Along with Durant, Devin Booker of the Phoenix Suns, Anthony Davis of the Los Angeles Lakers and Ben Simmons and Joel Embiid of the Philadelphia 76ers all received the honor but didn’t play in the game, in part due to COVID-19 precautions.

The game featured some truly spectacular plays, as two of the best guards in the league, Curry and Damian Lillard, demonstrated their shooting skills. The duo, along with All-Star game MVP Giannis Antetokounmpo, led Team LeBron to a 170-150 victory.

Along with the All-Star Game, the weekend included several showcases, including the increasingly popular Three-Point Contest, Slam Dunk Contest and skills challenge. But under current circumstances, many players, such as Williamson and Brown, declined invitations to participate in these contests, citing injury concerns and their desire for rest in an unusually chaotic NBA season.

The Dunk Contest featured three participants instead of the usual four and occurred during halftime of the main game on March 7. After his high flying dunk in the final round — which included a failed attempt at kissing the basketball rim — Portland Trail Blazers guard Anfernee Simons won against New York Knicks rookie Obi Toppin and Indiana Pacers rookie Cassius Stanley.

Compared to spectacular dunk contest performances in the past from the likes of Dominique Wilkins, Vince Carter, LaVine and Aaron Gordon, 2021’s dunk contest left much to be desired. Part of this was because of the meager crowd of 1,500 fans, but the players’ lackluster dunks mainly made the event disappointing.

In contrast, the 3-Point Contest boasted a relatively star-studded cast. The two-round event provided far more excitement than the Dunk Contest, despite some noted 3-point shooters such as Lillard electing not to participate. LaVine, Brown and Donovan Mitchell of the Utah Jazz were all eliminated in the first round.

Curry set the competition on fire, scoring 31 points in the first round. He made it to the second and final round where he faced Conley and the Boston Celtics’ rising superstar Jayson Tatum.

Ultimately, Curry edged out a win in the competition, making four out of his final five corner shots en route to a one-point victory over Conley. To many, the win further cemented Curry as the greatest shooter in NBA history.

“As a Warriors fan, Curry’s win was great to see,” sophomore Keon Nikfar said. “He started off slow and it didn't seem like he could pull it off, but of course he immediately started hitting almost every shot after that and ended up winning.”

Still, the COVID-19 pandemic prompted many players and fans to question the necessity of this year’s All-Star weekend, even though it was held over the course of just one day instead of the usual three.

Star point guard Lillard expressed a desire to not play in the events but acknowledged the reasoning behind the NBA continuing to hold them.

“If they said we’re not going to have a game, I’d be perfectly fine with it,” he said in an interview with NBC Sports Northwest. “But if they say we’re going to do it, I understand that because this is our job, and with the kind of money we make, you’ve got to make certain sacrifices and certain things have to be done.”

The NBA’s All Star Weekend was undoubtedly less of a spectacle than normal. With many of the NBA’s biggest names sitting out, younger talents were forced to step up and make a name for themselves. Save for the Dunk Contest and the Skills Challenge, however, the events managed to deliver an exciting viewing experience.

“It might not be one of the more memorable All-Star weekends, but it still delivered an entertaining show,” sophomore Luke Wang said.