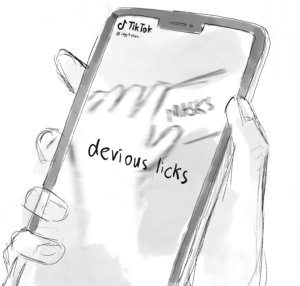 On Sept. 1, Tiktok user @jugg4elias posted a video of a box of disposable masks he supposedly stole from school, captioning the video “A month into school absolutely devious lick. Should’ve brought a mask.”

According to Urban Dictionary, a “lick” is a “successful type of theft.” Since @jugg4elias’s video went viral, the act of “devious licking,” or stealing items from public facilities, has become a national trend.

Since then, thousands of students around the globe have participated in the trend, filming themselves stealing random items,  ranging from paper towel dispensers to bathroom doors to school buses from their schools. The videos posted on TikTok under the hashtag #deviouslick, have garnered over 73 million views.

The trend reached SHS on the week of Sept. 12 when a classroom hand sanitizer dispenser was found in a boys bathroom and four full rolls of toilet paper were found thrown into a toilet bowl.

“The student(s) who wasted the toilet paper rolls are inconsiderate of their peers and are vandalizing the restrooms. If identified, consequences will be levied,” principal Greg Louie said in an email.

Paul Weir, the school’s supervisor of maintenance and operations, had seen cones from the school’s parking lot dumped into the boys’ toilets. He says in the couple years that he has been working at the school, he has never seen vandalism to this scale.

“Though we haven’t caught anybody in the act, we’ve made the administration know that we are seeing more vandalism than usual,” said Weir.

Many students have reported other instances of “devious licking” on campus.

Sophomore Asad Khan heard of someone trying to knock down an office sign as well as sticking disposable menstrual products with the words “diabolical lick” written on them around campus. Additionally, he saw someone try to walk out of their classroom with a chair in hand, only to be  stopped by a staff member and asked to return it.

Weir said the school has sustained damage that still needs to be repaired.

“We have purchased some new towel dispensers to replace some of them that were vandalized because they are broken,” he said. “You pull them off the wall, their plastic housings are broken, they are destroyed.”

As of Oct. 7, 13 students in the U.S. are facing criminal charges for participating in extreme versions of the trend, according to the People magazine, such as sneaking off campus to vandalise nearby park bathrooms.

At Saratoga High, consequences may range from suspension to a citation from the sheriff’s department to a fine for reimbursement, according to Louie and the Saratoga High student handbook.

“I really hope that the school can get control of the situation and put it to a stop,” Khan said. “It has already been dying down on TikTok so I hope that the vandalism will stop.”