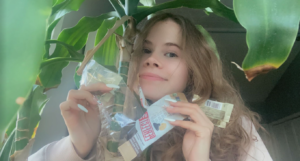 A selfie with a small tree holding the trash collected from the week.

We have all seen the heart-wrenching pictures of turtles strangled in plastic and read about glaciers melting and coral reefs dying due to global warming. Not to mention, wildfires, hurricanes and floods are on the rise, and it’s all because of how we have been living and the damage it’s doing.

While we all are aware of the consequences of climate change and dumping trash into the ocean, we hardly ever consider what we as individuals can do to prevent such disasters from worsening.

That’s why I decided to take on the challenge of living an environmentally sustainable lifestyle for a week.

My journey began with creating a list of goals for myself: I promised myself that I would take 5-minute showers, restrict the amount of dairy I ate, limit plastic and food waste, minimize the use of the heater and switch off the lights when I left the room.

Instead of turning the heater on when I was cold, I decided to add more layers of clothing, which wasted much less energy than heating an entire house. I encourage everyone to put on an extra pair of socks or grab a blanket instead of cranking up the heat.

Another way I saved energy was by using candles as a light source. I would burn candles during the night and early morning when I worked out. Candlelight was much more relaxing than any bright light bulb, and something I will continue to use.

While many of these changes were easy for me, I struggled with others. For example, trying to shower and wash my hair in less than 10 minutes was much harder than I expected. However, now that I know that an average 8-minute shower uses up 17 gallons of water, I will still attempt to limit my time in the shower to less than 15 minutes.

Eliminating the use of plastic was another challenge. Going to the store to buy groceries made me realize how much plastic wrapping we use on a day-to-day basis, from fresh produce to loaves of bread. Avoiding single-use plastic is nearly impossible when shopping, unless shopping at the farmers’ market.

Because I’m already a vegetarian, the only food group I had to avoid was dairy — a challenge for someone living with a family who eats dairy regularly. However, I did find great vegan alternatives to ice cream and milk, such as Oatly ice cream and almond milk. Moving forward, I will gradually reduce the amount of dairy in my diet by introducing such substitutes.

When it comes to food and reducing one’s carbon footprint —  the total amount of greenhouse gases caused by an individual — many people have an all-or-nothing mindset. It’s not necessary to go fully vegan or exclusive shop at farmers’ markets to make a difference. Instead, people can implement plant-based days into their week such as Meatless Mondays. Other Earth-friendly changes include walking or biking to school, recycling, buying second-hand clothing and taking shorter showers.

In reality, it’s the small changes that add up to make a positive impact on the environment. While the challenge was hard at times, I encourage everyone to take up this challenge, and implement greener ways of living that will result in gradual but impactful change.