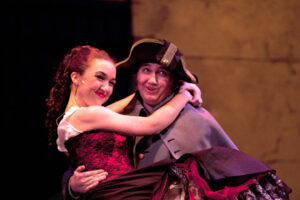 Students perform in 'Jekyll and Hyde.'

“Jekyll and Hyde” and Shakespeare. Both are famous and have been adapted into blockbuster hits. This year the drama department will be performing both in the spring musical and the student productions, respectively.

“Jekyll and Hyde” and Shakespeare. Both are famous and have been adapted into blockbuster hits. This year the drama department will be performing both in the spring musical and the student productions, respectively.

First up on the schedule is “Jekyll and Hyde.” Based on the novella “The Strange Case of Dr. Jekyll and Mr. Hyde” by Robert Lewis Stevenson, the stage version was originally produced by Steve Cuden and Frank Wildhorn.

“The musical is the exception to anything we’ve ever done before,” said senior Mikaela Burton. “It’s about good and evil, alternate personalities, and it’s really edge-of-your-seat theatre.”

The show will feature 40 cast members, and many veteran performers are looking forward to this new kind of show.

“I am excited to play Jekyll’s fiance in the show, a role I am new to and glad to learn,” said junior Madison Emery. “I have seen a lot of students being introduced to new roles, so this show has definitely expanded the types of character played by each performer.”

Senior Jae Lee will play the lead role as Jekyll and Hyde in the musical. Junior Madison Emery will play his fiance Emma, senior Hanna Harter will play Lucy Harris, Chaz Main will play John Utterson, and David Mandel will play Sir Danvers Carew. The show is directed by Jeff Hicks, an actor who is well known in the local theatre community.

“We are definitely approaching crowd-friendly hits this year,” said sophomore Sasan Saadat, who is participating in both productions. “‘Jekyll and Hyde’ and Shakespeare are both popular and I think it’s nice to have a crowd familiar with the production.”

Aside from “Jekyll and Hyde” the drama department will be performing mutliple student productions. Saadat will perform in one of these, a three-man show of “The Complete Works of William Shakespeare (Abridged).”

The student production is an amalgamation of characters and plays by Shakespeare, put together and performed by three actors who will each embody different characters. Although a newcomer to drama, Saadat will be working alongside veteran performers Josh Harris and David Mandell.

There will be various student productions, including “The Complete Works of Shakespeare (Abridged)” directed by Jay Lee, Black Comedy directed by David Mandell, and Laramie Project directed by Chaz Main performed on March 31 and April 1 in the Little Theatre.