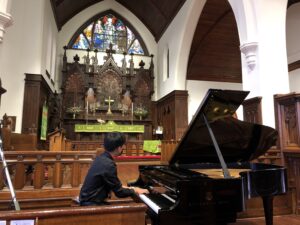 Permalink
Senior reflects on the ways that attending the Vivace Music Festival has molded his relationship with piano.

Pushing my way past the imposing set of double doors, I was surprised to see hundreds of students, parents and professors gathered in a hotel conference room. A glittering chandelier hung overhead the Steinway grand piano, set behind a large projector screen displaying the words, “Welcome to Wilmington!”

I recognized many of the teachers and students there. Last summer, they were floating rectangle faces within the Zoom cyberspace, but now they were tangible and talking, real life figures with distinct personalities.

The first time I attended the Vivace Piano Music Festival was in the summer of 2020. Originally to be held in Perugia, Italy, the camp shifted to a virtual format because of the pandemic.

At first, I doubted the effectiveness of an online music camp; there were simply too many logistical issues. How would masterclasses be conducted given internet lag? How would the quality of sound over Zoom come across? Would classes be held live, or would they be staggered for students in different time zones?

It was not until the camp gave me a professional grade Yeti microphone that I began to see a glimpse of the high-quality program that was to come.

The online festival ran surprisingly smoothly. Each day, the festival director sent out a list of Zoom links for different events: from masterclasses centered around unconventional topics like getting into the music industry, signing with record labels and winning international piano competitions, to live concerts performed by the faculty.

The festival also did an impeccable job of handling any technical issues that came along. The free Yeti microphones given to each participant were not just a bribe — they ensured professional-grade sound for every class and masterclass. Each event had a tech supervisor ready to address any issues. Most importantly, the professors still provided expertise during masterclasses, despite being possibly thousands of miles away from the students.

Even with all of these positives, though, I felt completely out of place.

Classes were held by professors from top conservatories like Julliard and Peabody, as well as winners from nearly every major international competition.

Not only were the faculty literal giants of the professional piano scene, but over that week, I witnessed countless displays of genius, prodigal talent from peers and other participants: Middle schoolers were playing the most technically challenging Chopin etudes and Ph.D. graduate students pursuing their Doctor of Musical Arts were playing Rachmaninoff piano concertos.

Surrounded by so much talent, I felt a kind of imposter syndrome. Out of nearly 200 international applicants, only 50 were selected to attend the program.

In this group, I wondered, How had I been chosen?

Though I had already played for 11 years, I would say that I’m just decent at the piano — I ‘ve won some national competitions and even performed at Carnegie Hall in 7th grade, but next to the achievements of my peers, some of whom were pre-collegiate students at Julliard, I felt I didn’t belong.

What ultimately consoled me was that while many of my peers were set on pursuing music not only as a major in college but perhaps even as a career, I had not made such a decision yet and wasn’t practicing 5-8 hours every day the way they were.

That was the difference: the level of passion and time we each put into the piano.

It wasn’t until the end of the camp that I began to consider a more serious future with piano. Previously, I had never considered the possibility; my parents insisted that my college major would dictate my career, and a career in piano performance didn’t fit their idea of a stable, well-paying job.

But the faculty and professors at the camp represented another outcome. They had pursued such a path and found success.

During the festival, I met undergraduate students who majored in music but were not thinking about music as a career. They were passionate about music, but also had interests in other subject areas. Many were enrolled in double major programs with plans to go into medical or even business fields.

As I began pondering my future with piano, the virtual Vivace Piano Music festival came to an end. The online camp left me with many things to think about, not only about music but also lessons about passion and the importance of persistence and practice.

My online junior year of high school brought more homework and stress, but for the first time in my life, I had more time to practice piano. The camp had increased my desire to play and I now practiced twice a day, an hour each time.

So when the opportunity came to attend the camp for a second year, this time in person in Wilmington, North Carolina, I didn’t hesitate to take it.

At first, my parents did not want me to attend a 10-day camp in person. The rate of COVID-19 had dropped somewhat due to new vaccines, but the Delta variant was emerging as a serious threat. After many nights of heated discussions, we came to a decision: My parents would let me attend the camp in person, but on the condition that they come with me — it would be a family vacation of sorts.

Prior to going to Wilmington, we each had to take a mandatory PCR (polymerase chain reaction test). Once the negative COVID-19 results were emailed to us, we were ready to go.

With the camp’s strict adherence to COVID-19 protocol and the many uncertainties of the pandemic, I expected only 20 or 30 in-person participants, with the rest electing to attend the simultaneous virtual program.

Boy, was I wrong.

Most of the prodigies and participants that I had met last summer were there at the orientation session. Many of the professors and faculty were also returning, with some new additions and slight changes here and there.

While the remote camp had placed more emphasis on recording and digital-based music, the in-person camp offered more practical classes — ones that covered how to practice effectively or prepare for competitions.

Despite having many of the same features as the online camp, the in-person Vivace festival possessed a certain vigor that the online program lacked. Not only was I able to interact with my peers in real life, but I also connected with many professors I had met the previous summer.

Playing for them in-person was a truly different experience than playing over Zoom. Lessons were more nuanced, and professors were able to demonstrate techniques only a few feet away from me.

Each day of the festival brought new and exciting experiences. Besides learning from acclaimed professors and attending live concerts, I was able to connect with students of all ages, from all over the world.

These students introduced me to a side of piano that I had never understood before; piano for them was a gift, a gift that I realized I needed to hone and share with others.

These thoughts made me realize what imbued the camp with such a reverent atmosphere — it was the almost palpable passion for music that was reflected in every event and participant. I had experienced something similar the previous summer, but in-person, that feeling was much more pronounced.

With every person around me showing such passion and appreciation for the piano, I could not help but mirror such sentiments. Once again, I was confronted with the question of my future with piano.

This time, however, I knew I needed a solid answer — college applications were just around the corner and I needed to make a decision.

My playing had not only matured, but I understood what I wanted now — the Vivace festival had only confirmed my thoughts. I realized that I wanted to major in piano in college, but also pursue some other subject as well.

If there was one key lesson I would take away from both of my Vivace camps, it would be that piano and music create opportunities for us to explore.

I have finally understood the place that piano has within my life: no longer a time-draining burden, but rather, a period of bliss — one that I look forward to pursuing every day.