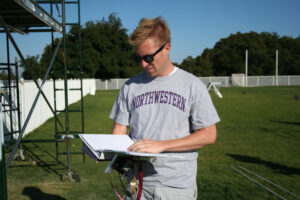 Walking into the music room, one observes the familiar sight of music students chatting behind pedestals, the familiar pitchy jumble produced by array of various instruments and an unfamiliar face. Seth Jones, Saratoga High’s new band director, can now be seen teaching the symphonic band and jazz ensemble.

“I’m very excited to be here and get to know everyone,” said Jones. “I want the students to achieve their best and work their hardest and at the end of the year give really great performances that people want to come and hear.”

Holding a degree in clarinet performance from Carnegie Mellon and a graduate degree from Northwestern University, Jones taught at a school near New York City for six years before moving to California this summer.

“I knew the [Saratoga High] music department was really big and I knew that that would be a really fun thing for me to do and work with,” said Jones. “

So far, Jones’ experience has been an enjoyable one.

“I like the people and the music department is great,” said Jones. “We have a lot of fun. The students work very hard and they’re overall pretty good so it’s been a good experience.”

“Mr. Jones has a good sense of humor to make rehearsals more fun but he also knows how to work us and give us constructive criticism,” said senior clarinetist Krista Chow. “I think he focuses more on the musical aspect of band. Since he plays the clarinet, he helps our section a lot and gives us advice.”
Senior drum major Jason Shuian also gave Jones high marks.

“[Mr. Jones] has an extremely good ear for incredible music,” said Shuian. “I can see a lot of passion when he teaches. He is always so excited to start class and his enthusiasm is very contagious.”
Although Jones misses the East Coast, he is excited to be starting a new year at the West Coast and at Saratoga High.

“I’m just very excited to be here and get to know everyone,” said Jones. “So please, come and see the bands perform.”