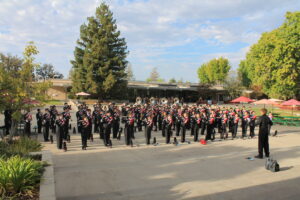 After struggling through the pandemic for over a year, the music department has finally returned to their ensembles, much to the relief of students and their teachers.

Over Zoom, students were asked to play one at a time, with the rest of the class instructed to play along with them while muted instead of together as a group — a hollow and not very fun dynamic.

“Playing alone in your living room in front of a Zoom screen was really awkward,” said senior Maddie Jin, who is now in her fourth year in the orchestra program and plays the cello in the most advanced ensemble, Saratoga Strings, said. “Orchestra is one of those things that you really cannot do online.”

Even when the school began hybrid learning, the system still proved dysfunctional for the many students who remained online.

Going into ‘21-’22, Shiuan was unsure about his students’ musical skills.

“To be honest, I thought it was gonna be a lot worse than it actually turned out to be,” he said. “I thought I was going to go to ground zero.”

Shiuan said students showed up to band camp having practiced at home. Orchestra students also entered the first day of class with an assigned new piece prepared and were eager to play alongside their peers again after being deprived of the experience for so long.

Jin said, “Even the really simple chorales we do for warmups make me so excited because you get to actually hear everyone around you and see Mr. Boitz conduct.”

Similarly, junior Dyne Lee, who plays the clarinet in Symphonic Wind Ensemble, believes playing in a live ensemble is much more engaging and encourages growth in musicianship. “It definitely helps me get better because I’m paying attention to tuning and stylistic details.”

While both staff and students have far more freedom during in-person music sessions, there are still necessary accommodations in place to adhere to current COVID-19 regulations. For example, students in band use special masks that are double-layered with little slits in them, so that they can cover their mouth when not playing.

Shiuan said the masks can be inconvenient because they slightly mute sound and block students’ faces. Additionally, after a year of attempting to scrutinize students’ playing via Zoom, Shiuan said seeing musicians’ faces is important to allow teachers to gauge their technique.

“That can cause some issues, but it’s all just about adapting to [the situation],” Shiuan said.

Because music is not considered an aerosol-generating activity, performances will occur on the McAfee Center stage as usual throughout the year, though masks must be worn and audiences may be limited to a certain number per family.

Despite these restrictions, Shiuan said the return of playing live concerts is “really good to hear, so fingers crossed.”

In addition to preparing for in-person concerts, the music department is looking to its long-awaited Europe tour during the summer of 2022. The major tour was originally scheduled for 2020 but was postponed twice due to the pandemic.

With around 400 people attending the trip — 250 them students — the music department has a packed itinerary. Starting off in Vienna, they will first perform in some of the most renowned concert halls and churches in Austria, including the Golden Hall of the Wiener Musikverein. After that, they will travel to Slovenia to perform at the Imago Festival, an international invitation-only festival. Orchestra and band will finish off their tour with a quick stop in Austria for the Mid Europe Schladming festival and later in Prague for the prestigious Fringe Festival, which the music department’s ensembles were exclusively invited to.

“I can’t believe we’ll be performing at places like the Musikverein,” Jin said. “That’s just insane.”

The music department looks forward to a successful and eventful year, and the students and staff are more excited than ever, Shiuan said.

“Even though we have masks, this is way better,” he said. “We can do so much more now than we did ever in hybrid learning.”