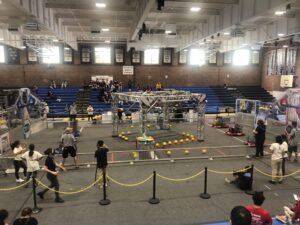 The MSET Fish earned 3rd seed and won the Founder’s award at CalGames, their most recent offseason competition, from Friday, Oct. 1 to Sunday, Oct. 3 at Lynbrook High School. The team competed against 28 other robotics teams from the Bay Area.

The game, introduced in January, is the same as last year’s game wherein teams design a robot to complete certain challenges, from shooting a ball into a target to hanging on a balance bar. Like last year, the event will remain online.

On the second day, after winning both their scheduled matches, the robotics team placed third, but lost in the first round of playoffs due to their alliance partner teams’ robots malfunctioning. After the matches ended, the team was awarded the Founder’s award, which recognizes an organization or individual that has contributed significantly to the growth of FIRST, the robotics organization that hosts the competitions.

“Despite our robot being tailored to the 2021 at-home challenges in addition to many of our team members lacking competition experience, I thought our team did well,” Kasnavi said.

The team had struggles in their hardware the week prior to the competition, and a lot of work relating to electronics and software was incomplete. However, despite the team’s lack of preparation, they exceeded expectations and are looking forward to their next competition, Chezy Champs, from Oct. 29-31.

“I hope our team can at least make it to elimination matches,” Kasnavi said. “The teams there will be super strong and very competitive.”