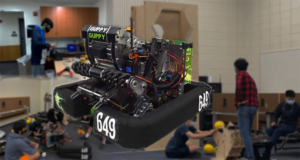 This year’s team, led by Senior Colin Li, has worked tirelessly on their robot, shown in this photograph. In the background, Li and other members of the team assemble and test the robot.

Saratoga’s FIRST Robotics Competition team faced many challenges this year, but were still able to place within the Top 100 in world leaderboards.

FIRST Robotics Competition (FRC) is a robotics competition where teams of around 45-60 students, as well as a few coaches and mentors, work over a six-week period to build a single robot weighing up to 125 pounds to compete in that year's game. Winners of local tournaments qualify for an international competition; however, due to the pandemic, FIRST decided to cancel the traditional in-person world competition.

The FRC challenges are often based on a theme. This year’s was Infinite Recharge at Home, in which there were two main components of the scoring: robot design and robot skills. For the first component, MSET 649 uploaded a flyer describing how they designed the robot and pictures of the robot to the submission portal, followed by an interview with judges.

In the latter, the team was required to upload videos of their robot’s best runs, which involved activities like shooting power cells, autonomously guiding the robot and then submitting their raw score into the portal. The objective was to get as many points as possible from shooting power cells into a target with three holes, called the power port. Then, a scoring system decided the point total based on the number and difficulty of tasks each robot performed.

The team submitted the videos on April 7. However, due to a rule change that team members may not contact the robot while attempting a challenge, two of the five At Home Challenges scores were disqualified, disappointing many members who had worked hard on the robot.

Luckily, only three At Home Challenges were required for a team to be considered for an award, and these three scores led the team to end up as a finalist in their regional group of around 30 teams and place 86th in the world. The awards show will be held on May 15, with other awards to be announced. Particularly, they are still waiting on the results of another challenge they participated in: the Game Design challenge.

The Game Design challenge involved designing a FIRST Robotics competition and pitching it to judges. MSET 649 based their game around combining 4-inch S-shaped links into longer chains, creating a line of inter-connected links. Teams then placed these chains on bars on designated horizontal poles, perpendicular to the ground.

“The challenge was really rewarding and stressed the team’s creativity,” said freshman Nikhil Mathihalli, lead for the Game Design challenge. “We had to use teamwork and modeling software to make our vision a realistic and playable game.”

Both mentors and student leaders are proud of their progress this year, despite the majority of the team not attending in-person meetings due to the pandemic.

At the beginning of the season, the team split in different groups, such as hardware, software and electronics. From there, the members of each group split into subsystems, such as a shooter hardware subsystem or a drivetrain hardware subsystem. Each week, the members would work on their respective subsystems in order to further their part of the robot. Everyone would meet on Fridays and Sundays to discuss what work had been accomplished in their subsystem for that week. The final couple of weeks were used to put things together.

Senior Colin Li, MSET 649 team lead, said he believed this structure worked, but was cognizant of things the team could improve on. By not meeting deadlines, the team was unable to build more versions of the robot and create more robust solutions for problems. Li said that if they redid the season, he would have been more strict with their deadlines.

To prevent this next season, Li plans to further develop underclassmens' skills by training more members and building a new robot. He also plans to work with software in the offseason in order to document the work they have done this year.

Lead MSET mentor Sheeba Garg said the team adjusted well to the online environment. Once the club decided which challenges they would pursue, they split up into subgroups for easier communication and collaboration.

Both Li and Garg also said they believed that the online season was beneficial for younger students who were able to lead different parts of the robot, unlike freshman and sophomores in previous years.

“Although this season wasn't quite what I expected, I'm glad that we were still able to build a new robot and compete,” Garg said. “I am really proud of how our team stepped up and performed this year. They worked tirelessly to keep the robot running and performing at it’s best. Despite the challenges we faced, our students were great this year.”