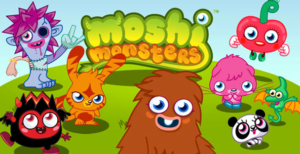 Moshi Monsters is a game where players design a pet monster and play mini-games.

Revisiting my favorite game from my childhood relives many memories, but game seems pointless.

As a fifth grader on a family trip to China, I was first introduced to the video game Moshi Monsters. After searching up “fun online games” in an effort to find some entertainment,  Moshi Monsters popped up, a game I had never heard of nor thought I wanted any part of. Little did I know, however, that this game would end up defining my childhood.

To play the game, players would create their own character that they take care of throughout the course of the game, while also uncovering and playing the different minigames scattered throughout the huge city of Moshi Monsters, named Monstro City.

I probably spent over 100 hours on this game in a span of a few months. Initially, I was drawn to Moshi Monsters by the visuals. All of the monsters were cute in an endearing way, and pockets of color, interlaced into graphics such as the stores and food, painted the screen.

I spent many hours getting lost and finding my way back in  the Monstro City, weaving in and out of the streets and exploring the plethora of hidden places. Still, on every street, there was at least one minigame to play.

One game I always played was “Ice-Scream” where I made ice cream for different monster customers. The challenge of the game was to serve the ice cream before the customers became impatient and angry. My strategy was to premake the ice cream dishes, each with different flavors and combinations, so I would have all of them ready to serve the customer — even before they ordered. I was an expert at the  game, so much so that I basically completed all the levels.

Another game I really liked to play was “Pet Grooming Studio,” where I washed and brushed dogs and cats. I liked the feeling of taking care of animals, and I especially loved playing the challenge version where I cleaned as many animals as I could in under a minute.

There were also shops where I could buy food for my monster or decorations for my room. Most of the time, the food was either really cute or really disgusting — there were rarely ever any “normal” options. For instance, I would consistently buy a Roarberry Cheesecake because it looked very appetizing to me, while I would steer clear from the  repulsive options such as Garlic Marshmallows and Spider Pies.

Another aspect of the game I always looked forward to was taking care of my garden. When I planted three seeds in a certain pattern, it often attracted a “moshling,” a small pet monster that could be caught and displayed in my virtual room. I loved trying various combinations of seeds to see if I could catch a very rare moshling.

One time, I did actually end up catching  a really rare moshling — a cupcake with wheels named Cutie Pie. I was so happy when it showed up in my garden that I raced to catch it and proceeded to take more care of it than my actual character. I fed it, and took it around with me wherever I went in the game.

After we returned from China, I had a lot less time to spare, so I spent less and less time on the game, and eventually forgot about it.

A few weeks ago, nearly five years since I had played it last, a family friend mentioned Moshi Monsters to me, and I remembered how much fun I had playing it. I decided to retry the game, certain that it would still be as fun as it was back then. After all, it had been such a large part of my childhood that I was certain I would fall back into the Moshi Monsters trance if I restarted the game.

I created a brand new account, picked out a new monster, painted it purple and named it Louie, obviously after Louis Vuitton. As I started playing, the initial ecstasy I had for the game wore off, and I realized how boring it was. Though I roamed the streets buying food and room decor from different stores and played the minigames offered, it just wasn’t the same.

Even my favorite minigames became boring after a few rounds. The only aspect of the game was slightly interesting was the ability to go on quests called  “Super Moshi Missions,” where I could help save the city from an evil monster.

Though I was intrigued by  the concept of having missions to save the city since it created an actual objective to the game, I realized that only the first level was free for nonmembers. To level up, I needed to get a premium membership for $6 a month.

After going back and replaying Moshi Monsters, I realized that there is really no point to the game, and the only reason I liked it was to play the minigames. But more than anything, although Moshi Monsters defined my childhood, the game isn’t for me anymore — I’ve grown up.