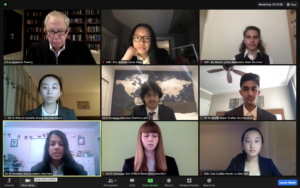 The defense team takes a picture during their last round of the virtual Santa Clara County Tournament on Feb. 4.

Despite falling short of quarterfinals, the new team makes a surprising comeback at the annual Santa Clara County competition

Senior mock trial president Kaitlyn Tsai still remembers the evening she received an email from club adviser Michael Tyler, letting her know that the prosecution had won their first round of the Santa Clara County Tournament against Mountain View High School on Jan. 28.

“When we got the results, I literally screamed; I'd gotten into a college the previous day, and I was more elated about this than college,” Tsai said. “I don't think I can properly describe how it felt because mock trial has been something I've invested in so deeply, and to see how far we had come just made my heart feel so full and happy.”

For Tsai, the prosecution team captain, it was a gratifying closure after five months of hard work and four years on the team.

In the weeks leading up to the first county competition on Jan. 26, the team participated in the virtual Santa Clara County Mock Trial Invitational from Jan. 12-13, two rounds of practice scrimmages bringing in schools from as far away as San Mateo County.

As one of only two members on the 15-person team who has had in-court experience — the other being senior defense captain and secretary Shahmun Jafri — Tsai was pleasantly surprised at the team’s progress in the weeks leading up to practice scrimmages.

“I was really impressed by and proud of how much our team grew throughout the season,” Tsai said. “Things started out a little rough because pretty much no member had any experience, but our performances at those competitions floored me. Each time we competed, we seemed to improve, and at our first invitational, you couldn't even tell we were a bunch of newcomers. Things only got better from there.”

Morale was high at the beginning of the competition season. After weeks of running through opening and closing statements, rehearsing witness responses and practicing objections, Jafri noticed a visible shift in outlook and attitude, a factor that he believed ultimately pushed each participant to perform their very best.

“I've seen many of my mock trial folks improve a lot with their objections and confidence,” he said. “I believe that with practice, we were able to build the confidence we needed to help us prepare.”

Jafri expressed his satisfaction with the ending of the season, saying that he was especially “proud of the team for doing a great job in objecting on the right time and giving out pretrial motions.”

The season wasn’t just work and run-throughs, however: along the way, members began cultivating team spirit and friendships even outside the virtual courtroom. Through group chats, students conversed during and after trials, encouraging each other and talking about performances from the opposing team that were funny or memorable.

The season offered a chance for freshmen and juniors alike to learn more about the legal field, albeit in a virtual environment.

“One of the most interesting things about the competition was seeing all the witnesses from other schools and how they portrayed themselves,” freshman Sarah Zhou said. “[Even though the experience was] probably not at all what a real competition is like, it was really exciting, especially when I did something I enjoyed, such as running the opposing attorney’s time during cross examinations.”

The team’s official season drew to a close in early February, and since then, Tsai and attorney-coach Ashwini Velchamy are looking forward to meeting biweekly. They hope to further the members’ knowledge and interest of the judicial system through movie screenings, current events discussions and guest speaker events.

“Through the competition season and beyond, I want students to understand the power that institutions and people have over the lives of defendants,” Velchamy said. “Even though this is a competition, it's not a game in real life. It's not, or at least it shouldn't be, about winning or losing. Thinking critically within the legal framework is important for winning trials, but thinking critically about the legal framework is important for justice.”

Keeping the club afloat after this season, however, will be no small feat. Since Velchamy lives in Louisiana, the incoming officers will need to coordinate with her and Tyler to secure a new attorney-coach for the fall. On a similar note, due to Tyler’s busy schedule as journalism adviser and English department chair, the officers will need to search for other faculty members who can advise the team next year.

Things will only get harder from here, and Tsai knows this all too well. Even after struggling with class of 2020 alumna and former president Christina Xiao to keep the club running her junior year, Tsai reminisced on her first year in mock trial and “knew the club was something [she] had to save and try to get back up for following years to experience.”

Despite the lack of adult leadership for next year threatening to bring the club “back to square one,” Tsai and the officers remain hopeful and have begun to set their sights towards ensuring the future of the club for years to come.

“There are no words I can use to properly describe how grateful I am for everyone who has helped us out these years,” Tsai said. “This is my happy ending for the club. I don't want to be the person who pulled up mock trial for a year only to have it crash again. I want to be the person who pulled the team and let it grow from there. And who knows? Maybe I'll be back in a few years to coach.”