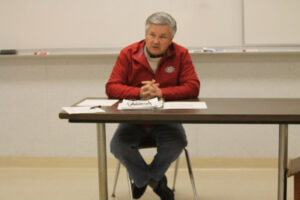 One of the school's original teachers, Dr. Hugh Roberts is still helping students as the longtime coach of mock trial.

Remember dreaming about future careers as a child, struggling to choose between becoming a teacher or a doctor of philosophy or an author or a lawyer? How about choosing all four?

Remember dreaming about future careers as a child, struggling to choose between becoming a teacher or a doctor of philosophy or an author or a lawyer? How about choosing all four?

Dr. Hugh Roberts taught at Saratoga High from 1959, the year the school first opened, to 1979, holds a bachelor’s degree and Ph.D in Educational Social Psychology from Stanford, co-authored four paperback books for high schools and ran his own law office from 1984 until 2006. Roberts, now happily retired, coaches the school’s mock trial club.

In the late 1950s, Roberts was hand-picked by Dr. Vernon Trimble, the first principal, to be one of become one of the school’s first teachers. Trimble was Roberts’ English teacher at Los Gatos High.

“When Dr. Trimble was selected to be the first principal, he sought out ex-students to help open it,” Roberts said. “Friends of mine from that same 1951 high school class at Los Gatos he selected included Benny Pierce for P.E. and Bert Pfister to head the English Department. More Los Gatos grads were added in the next few years, and it is hard to describe what it felt like for us all to come back together and have the chance to create a school together.”

At Saratoga High, Roberts taught world history, speech and debate and drama. He still fondly recalls the first play that his students put on in the school library: Ayn Rand’s “The Night of January 16th.”

“It was a court room drama with the jury selected from the audience each night—with two endings based on their decision,” Roberts said.

At the time, Roberts did not know that he would one day be a lawyer at an actual court, instead of just a bystander in a fictional court during a few late nights in the school’s library. In 1978, California’s Proposition 13, which lowered property taxes, threatened to drastically cut the amount of money spent on public schools, and Roberts feared that, if the proposition was passed, the school he knew and loved would be destroyed.

“All counselors would be eliminated. Most electives, including all social studies electives, would be eliminated, and all the great young teachers would be terminated—I did not want to preside over a wake,” Roberts said. The proposition did pass, and though it wasn’t as devastating as he feared, it did greatly reduce money available to public schools.

In the meantime, Roberts decided to leave his teaching career to try his hand at law because he “was the most expensive teacher [the school] had.”

“If I left, I could save two young teachers’ jobs,” Roberts said. “Thinking about it, I thought I would love to try law: a win-win for everyone. The principal, Tod Likins, said he would schedule things to make it work for me, and it did.”

Roberts studied “an old style ‘general practice,’ beginning with mostly criminal law and, after a few years, was dominated by civil litigation, wills, trusts and probate.”

The first judge Roberts appeared before, Judge Wayne Brazil, was a graduate and ex-student body president.

“That night [before I appeared in court] I rewrote my brief for fear he might red pencil it and ask me to resubmit,” Roberts said.

Although Roberts “loved every minute of the practice of law,” his first love remained teaching, and he was always eager to go to school each morning. Even in retirement, Roberts teaches students in the mock trial program, a program he organized here in 1984, the first year the National High School Mock Trial Championship began.

Since Roberts started the club, he has coached it on and off, depending on whether or not other faculty were able to assist coaching. Unfortunately, Roberts thinks that mock trial may not last much longer. As long-time leaders of the club begin to hand over the reins to new coaches and coordinators, few adults are up to volunteering their time for the team.

“No full-time faculty member is interested in assisting so the prospects for next year are quite grim,” Roberts said.

“Between trying to spoil my grandchildren, pro-tem judging, two regular golf foursomes, competitive national bridge tournaments, and restoring the library of Senator Phelan at Montalvo, my wife and I have a very active, happy, full life,” Roberts said.