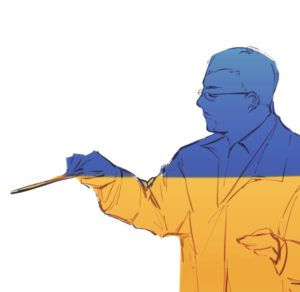 Photo by Leyna Chan
In honor of conductor Yuriy Kerpatenko.

In the almost year-long war between Russia and Ukraine, Russian president Vladimir Putin’s generals and soldiers have shown almost no regard for human rights or basic decency. A case in point involves Yuriy Kerpatenko, 46, who was widely considered one of the most respected musicians in Ukraine. He was murdered by Russian soldiers on Oct. 14. His crime? Refusing to conduct a concert in Kherson, Ukraine.

Kerpatenko studied at the prestigious Kyiv Conservatory, and since 2000, he had been the principal conductor of the Kherson Regional Philharmonic, the region’s main center of musical culture.

He was asked to perform with the Kherson Regional Philharmoic’s chamber orchestra at the International Day of Music on Oct. 1, an event established in 1975 to promote peace and friendship between musicians and their national cultures. In a statement published on their Facebook page, the Ukraine culture ministry said that Kerpatenko “refused to cooperate with the occupants [Russian authorities]” and declined the role. According to the Guardian, family members lost touch with him in September, so the exact time of death could not be determined. A month later, Kerpatenko was found dead in his home, shot by Russian soldiers.

Response to Russia’s use of music as a military tactics

As word of Kerpatenko’s death spread, Ukrainians responded with outrage. Many conductors and musicians condemned the Russian government on Twitter.

Among them was Dalia Stasevska, a Ukrainian-Finnish conductor who expressed her condolences.

“No words. Hearing your colleague being killed,” Stasevska said in her tweet. “Russia imposing a ‘comply or die’ policy against artists is nothing new. It has a history which spans for hundreds of years. Let our fight for human rights, against dictatorships and free Ukraine be even stronger.”

The Russian government has threatened musicians as an intimidation tactic since the Soviet days in the 20th century. Other musicians such as Evgeni Mikeladze, conductor of the Georgia Philharmonic Orchestra, have suffered similar fates as Kerpatenko: Mikeladze was killed by Soviet forces in 1937 due to his involvement in the Russia and Georgia revolutionary movement. In honor of his death, the National Symphony Orchestra adopted Mikeladze’s name for their programs.

Historically, Russian authorities have used music to portray the facade of “improvement in life” there. In reality, musicians like Kerpatenko and Mikeladze are killed for refusing to become propaganda tools. Russia uses both military force and cultural activities such as International Music Day to manipulate other countries into believing they have everything under control.

Russia’s continuation of human rights abuses seem to get worse by the day.

Since Russia invaded Ukraine again last February, both sides have faced high death tolls, even among civilians. Over 70,000 to 80,000 Russians and 40,000 Ukrainian soldiers have been killed or wounded. Thirty million more Ukrainians were displaced from their homes.

The Independent International Commission of Inquiry on Ukraine and other human rights groups have condemned Russia for its use of explosive weapons in populated areas and attacks on fleeing civilians. The commission has also documented executions, unlawful confinement, ill-treatment, torture, rape and other acts of sexual violence. In some instances, children have been forced to witness their relatives being raped by Russian troops.

While the work of civic and political activists has been restricted, authorities still allow mass pro-government and state-sponsored events to continue. Russia also continues to assault prisoners of war, shown by the leaked graphic videos of inmates being tortured in Russian prisons.

Another instance of Russia’s exploitation of Ukrainian citizens includes the attacks on civilian infrastructure. In November, Russian airstrikes hit Kyiv, Ukraine, killing six civilians and injuring 30. As a precautionary measure in response to Russia’s attacks, Ukraine disconnected three nuclear power plants from the national electricity grid. These attacks caused harm to many innocent people, leaving hundreds of thousands of civilians in cold buildings without any heat, electricity or water system to survive.

This problem is exacerbated by Ukraine’s harsh winters, which typically have average temperatures of between 8 to 39º Fahrenheit. This caused even further complications as the water would freeze in pipes. Russia is committing blatant war crimes on innocent citizens, leaving them in the dark and cold, creating terror by making life unsustainable for them.

The use of banned weapons and artillery attacks have also killed hundreds of civilians in Kyiv, destroying at least eight civilian buildings and leaving cars and streets in wreckage. Russia’s withdrawal from areas of the Kyiv region revealed many dead bodies from the destruction caused by cluster munitions, powerful unguided bombs designed to release dozens of smaller bombs over a wide area.

It has been almost a year since Russia invaded Ukraine, with no sign of Russia’s human violations to end. Children have been killed, wounded, displaced and traumatized by the violence they witnessed. Hospitals, schools and buildings have been destroyed, and among many graves, places of torture and weapon remnants lie there. These sites have also housed the alleged forced transfers of people and expedited adoptions of children by the graves. How can we help Ukrainians? The best actions individuals can do is donating to organizations, volunteering or helping professionally and sending humanitarian supplies. And praying that Putin will finally come to his senses and stop waging this disastrous war against an innocent, sovereign nation.

Donating to organizations such as Rescue can help provide essential supplies such as food and clothes to Ukrainian refugees. For more information on ways to help Ukraine, please see the following list of organizations asking for assistance: https://www.npr.org/2022/02/25/1082992947/ukraine-support-help.