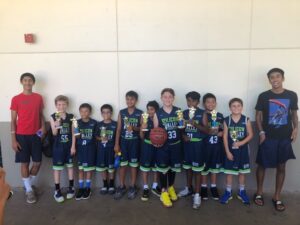 Just moments before the National Junior Basketball (NJB) championship game began this past summer, sophomore Ishaan Bhandari— the coach — stood in front of his team of third and fourth graders, motivating his players with one last message before tipoff.

“We have the potential to be the best team in our division,” Bhandari said. “We just have to trust each other and try our best.”

Bhandari’s team won the game by 11 points, cementing them as the 2019 summer champions of their NJB division.

Bhandari’s leadership was inspired by his own experiences under JV basketball coach Brandon Farelas, who coached Bhandari for three years. Farelas ingrained in Bhandari his love for basketball and motivated him to coach.

“I’ve always looked up to him and loved how passionate he was about the game of basketball,” Bhandari said. “I’ve seen how much it meant for him to see improvement from kids that he was coaching.”

Farelas taught him many of the drills Bhandari still practices, including defensive slide drills, free throw practice and passing exercises. Three years later, Bhandari continues to falls back onto Farelas’s methodical drilling to keep himself in basketball shape.

With the combination of Farelas’s foundation and Southerland’s adjustments, Bhandari’s game improved tremendously. Southerland believes that with Bhandari’s hard work ethic, the change will be ongoing.

“Ishaan has been improving since day one as a freshman, and will continue to,” Southerland said.

As for his decision to coach, Bhandari said he wanted to provide the same level of guidance that he received from his coaches.

Bhandari said he has adopted a similar coaching style to Farelas, running many of the same drills and exercises. Bhandari also picked up on his JV coach’s positive mindset, being sure to keep in mind the negative impact of some other coaches.

“Growing up, a lot of my coaches made me dislike basketball because I didn’t get to play much and play confidently on the court,” Bhandari said.

Now, having gone through the coaching experience himself, Bhandari recognizes the importance of prioritizing positivity over a winning-atall-costs mentality.

“For me, success is measured in multiple ways,” Bhandari said. “The most important thing is that all the kids have fun during the season and improve.”

This mindset of focusing on the positives has played a large role in shaping Bhandari into a better leader, especially as he slowly garnered his players’ trust and confidence over the course of the season.

“I like to play the players who give the most effort and enjoy the game,” Bhandari said. “For players that didn’t enjoy basketball as much and weren’t great at it, I encouraged them to try their best on the court and not to worry about how they do.”

Despite Bhandari’s leadership, his team started the NJB season with an 0-3 record, losing each game by a three-point margin. The close losses frustrated Bhandari’s players, who would challenge calls and let emotions loose.

“One of the kids would throw their arms up if they got called for a foul,” Bhandari said. “I would tell them not to worry about the refs and that I would deal with them, giving me déjà vu from my previous years playing with Brandon.”

The third loss was the turning point for Bhandari’s team. They won the next four games, and their success carried over to the championship game.

After the win, emotions were rampant. The players ran through the halls, beaming as they held their championship trophies.

By the season’s end, Bhandari felt far more empathetic toward his own coaches’ approaches and experiences.

“I see why my coaches actually want to coach when they’re pretty much not being paid at all,” he said. “It’s because they love basketball and want to share it with me and my teammates.”

Bhandari plans to coach NJB again in the fall.

“This summer has really transformed my perspective of basketball,” Bhandari said. “Not only in terms of wanting to continue playing, but also for me to spread my knowledge to the younger generation.”