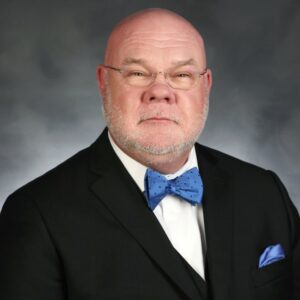 Permalink
The new superintendent has been sighted around both high school campuses and has made efforts to begin forming relationships with students and staff.

“When people see me, they see a bald white man, and they don’t know what’s under the bald white man,” new superintendent Bill Sanderson told The Falcon at the start of an interview.

On July 5, Sanderson, who prefers to be addressed by his first name, Bill, became the new district superintendent following the health-related retirement of Mike Grove.

Sanderson, 56, describes himself as a lifelong educator. He has worked in education for 30 years, beginning his teaching career at age 22, teaching high school biology and life science.

The district sought “an exceptional leader who will continue to build upon the District tradition of excellence,” according to a district job posting. In the hiring process for the position, the district consulted “94 teachers, support staff, parents, Board, administrators, community and students and survey input from 458 participants” to garner input from “all stakeholder groups,” as detailed in the district’s press release following Sanderson’s hiring.

A visit to the San Francisco Unified School District, at which he worked as an assistant superintendent for eight years, cemented the board’s decision to hire Sanderson. Sanderson, according to the district’s superintendent agreement, will earn $280,000 per year.

Sanderson has joined the district as it faces the difficult issues of staff retention, student mental health and the renewal of the parcel tax, among others. In addition, Sanderson will be working with an almost entirely new board of trustees and high-level district staff. The superintendent’s responsibility here is to garner perspectives from all stakeholder groups — students, staff and parents — to make well-informed proposals for action.

Growing up in poverty and with limited opportunities

Sanderson was raised on a farm in South Carolina with his father, mother, sister and animals. It was a vastly different environment than Saratoga or Los Gatos: He was raised in a family with what he called “multi-generations of poverty in the Deep South.” Both his parents did not complete their high school education.

A combination of education and hard work served as his ticket out of that lifestyle, he said.

With his humble beginnings, he didn’t realize the concept of power-based hierarchies — a mindset which, he said, translates into how he interacts with colleagues and students despite holding power as superintendent.

“[My sister and I] look at each other sometimes and compare ourselves to our cousins and say, ‘What happened to us?’” Sanderson said. “We are so different from our upbringing.”

In his new job, Sanderson makes a 45-minute commute to the district office from his condo in San Francisco where he lives with his partner, Jean, and their two french bulldogs.

He has a 27-year-old daughter and a newly born grandson who live in South Carolina, and his mother lives in North Carolina. His mother was an important figure in making him a hard worker and helping him learn the value of education — the two factors which continued motivating him throughout his life.

One way that his appointment is groundbreaking is that Sanderson is openly gay. Growing up in a generation and area significantly less accepting than the Bay Area, Sanderson came out at age 29 while serving as a principal — a position he ultimately had to leave.

He explained that high school principalships in the U.S. are overwhelmingly held by white, males who are ex-athletes. He described himself as “not fitting the bill” — pun unintended — and mentioned that his sexual orientation hence affects the interviewing and hiring process. He said that his previous experiences, especially living in the South, have cemented his need to explain who he is as non-negotiable.

“It has driven me to prove that, yes, you can do it,” Sanderson, who has never actively sought to be any sort of token or role model for the gay community, said. “I’ve been told before that you cannot be a high school principal while being openly gay. It’s a real part of my life that I have to deal with. It’s not something I run from.”

On his childhood farm, Sanderson was surrounded by animals, including bees and chickens. He keeps chickens now in a coop in his backyard after a long search for a house in San Francisco that was able to accommodate them.

“I did not care what the house looked like,” Sanderson said. “I didn’t care anything about it. The only qualification was that there would have room in the backyard for a chicken coop. I had the coop built before we ever moved into the house, and our chickens moved into the house the night before we did. You can’t take the farm out of me.”

Sanderson’s father’s beekeeping career also catalyzed his own. Propelled by the depleting population of honeybees and a rise in the number of urban beekeepers, Sanderson joined the San Francisco Beekeepers Association. He began keeping bees on the roof of his condo in the city and now keeps them on CalTrain property  — CalTrain issues permits to a few beekeepers to access the unusable area on top of their tunnels — down the street from his house. The homemade honey then goes into his kitchen or to his family and friends as presents.

There are other things that are forever ingrained into Sanderson, including his immense love for food. Sanderson relishes going to fine restaurants and said that his friends will often call him before traveling to a city in order to get his recommendations in the area — and with good reason: Sanderson once waited six months for a reservation at Pujol, one of the world’s best restaurants, in Mexico City.

Becoming familiar with the district

In the almost three months the school has been in session, Sanderson has visited the campuses, teachers and students, donning his trademark button down shirts, slacks and rainbow lanyard. When walking around campus, Sanderson said he would love for people to approach him and say hello. He usually greets people he first meets and asks them how they are, and he hopes this sentiment would be reciprocated.

Through his time here, Sanderson has already formed amicable connections with students. He told an anecdote about having lunch in Los Gatos a week before school’s opening: A number of football players walked into the café and started yelling, “Hey, Bill! Hey Bill!” The teacher he was dining with was confused at the ruckus, but Sanderson told her that he’d met them all a week prior and told them to call him Bill — all was well.

“I may hold the position of superintendent, but that does not mean that I’m not a normal person that you can engage with and have conversation with,” Sanderson said. “So I try, every time that I’m out, to engage with people and have conversations with folks and be real. They need to see that there’s a real person behind the person that’s making decisions every day about the district.”