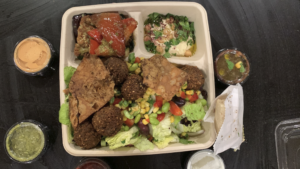 Photo by Anirudh Iyer
The vegetarian meal Anirudh got in its full form.

Permalink
We wanted to see for ourselves if Dish N Dash aligned with reviews, and we weren’t disappointed.

With Mediterranean restaurants becoming a common sight in the Bay Area, it seemed only right to try it for ourselves.

Following a quick search on Google Maps for Mediterranean restaurants, we decided to visit Dish N Dash, a quick 10-minute drive away from the school in Cupertino, on Stevens Creek Boulevard.

We opened with an appetizer: a couple of classic pita breads with freshly made hummus. The pita bread was light and fluffy and the hummus suited well, featuring a mix of tangy and savory flavors.

Afterwards, we proceeded to order entrees, which consisted of a traditional chicken shawarma with falafel and baba ganoush. To complement our dishes, we also chose a side of tabouli, a tangy Levantine salad made of chopped parsley, tomatoes, mint and onion dressed generously in olive oil.

The chicken shawarma arrived piping hot, perfectly cooked throughout. A variety of sauces such as garlic yogurt were available which further enhanced the experience. Good falafel should have a slightly crunchy texture upon first bite, but soften as it stays in one’s mouth. Its taste should resemble a deep fried fritter. Though we are not food experts, Dish N Dash’s falafel hit pretty close to those standards. As for the baba ganoush, the paste seemed slightly bland, but that might just be our preference since both of us dislike eggplants.

Though the meat-based dishes stood out, the vegetarian ones managed to outdo them. With a combination of fresh greens, artisan breads and delicate sauces, vegetarians can expect top-notch dining. From what we’d seen and heard about the frequency of meat use in Mediterranean dishes, we thought we’d be limited to quite unfulfilling, calorie-lacking food.

However, that was not the case.

We decided to order a veggie wrap, and though we’ve both been trying to cut our calorie intake, we went ham with this one. The wrap was too irresistible.

What immediately stood out were the aesthetics of the dish. On previous occasions, we’ve had messily assembled wraps with sauce dripping out and loose onion slices all over the plate. This wrap, however, was perfectly arranged; everything from falafel to hummus fit inside of the pita, and the wide-ranging color of vegetables sprinkled on top made the wrap visually appealing.

Taste-wise, the wrap was phenomenal. The falafels were perfectly toasted and tasted exactly right — common issues such as overbaked exteriors or extremely soft insides didn’t pose a problem. The variation of flavors inside can be best described by a symphony metaphor; hot peppers provided sharp crescendos to supplement the subtle softness of the cucumber, corn and sweet-ish hummus. With its incorporation of various flavor profiles ranging from mellow to piping hot, every bite was unique. Overall, this dish was wholeheartedly one of the best Mediterranean meals we’ve had, receiving particular approval from Anirudh, who is vegetarian. The combined cost of our meal was around $32, with the vegetarian dish being $14 and Daniel’s $18.

Though we’re pretty ignorant in the realm of Mediterranean cuisine, we can discern when food is good. Our experience was overwhelmingly positive, and we’d recommend it to anyone on any sort of diet. With its array of flavor profiles, perfectly assembled breads and almost velvety sauces, Dish N Dash was outstanding all-round.