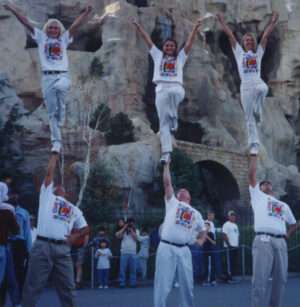 After a long and stressful school year, students take their separate paths to summer relaxation. Often overlooked, teachers also find activities and jobs during the break.

For instance, math teacher Laressa Ridge, who also stands in as the Cheer team adviser, has been an integral part of the Universal Cheerleaders Association (UCA) every summer since 1997. A cheer enthusiast, Ridge started the sport in high school. Her deep love for cheer stemmed from several years of experience as a competitive gymnast, which she continued through her college years, performing at Chico State, University of Washington and Sacramento State.

“We do special events such as the Macy’s Thanksgiving Day Parade and the London New Year’s Parade,” said Ridge. “Cheerleaders from across the nation perform in the parades.”

Performance preparation is intense – participants have to first learn the routine from a DVD on their own. The hundreds of cheerleaders often only have a few practices together to perfect the routine.

“It always turns out great and the cheerleaders are always a huge crowd pleaser along the parade route,” said Ridge. “It’s especially fun in London because cheerleading is not common in Europe. A lot of the participants give their pom poms away at the end of the parade and you see people walking around London with their new pom poms.”

Every summer, the UCA dispatches about 1500 staff members across the nation to teach at camps. Ridge has dedicated seven years to teaching at camps and has been the contact person for the West Coast staff for the last four years. While the camps are in session, Ridge holds the role of coordinator, overseeing camp coaches’ schedules.

Working for the UCA is not just a summer job for Ridge. Throughout the year, she judges competitions, including the televised High School and All-Star Nationals at Disneyworld, where qualifying teams from across the nation compete and hold two simultaneous competitions at Disneyworld’s Indiana Jones Theater and Wide World of Sports. The competitors are divided into different divisions, each evaluated by eight judges.

“I get to watch the best teams from across the United States perform their routines that they’ve been working so hard on throughout the year,” said Ridge.

What had started out as an extracurricular activity during high school has blossomed into Ridge’s passion.

“I don’t have time for any other jobs over the summer,” she said. “This is a full-time job and I love it!”