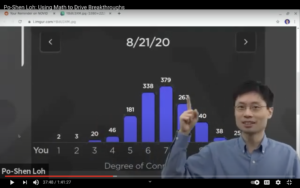 Po-Shen Loh, a math professor at Carnegie Mellon University, told students about the thinking behind the creation of NOVID, an app that seeks to show users how likely they are to get coronavirus based on their contacts.

In the Dec. 12 event sponsored by Toga Math Circle, he explained that instead of telling everybody who is in close proximity to a COVID-19 positive person to quarantine the way contact tracing apps do, NOVID tells users how many relationships away a positive case is from them so they can have a more accurate idea of their own risk.

Senior co-president Rohan Kumar said that Toga Math Circle had emailed back and forth with Loh and asked Ben Brotzman, the school’s Zoom coordinator, to set up the webinar.

“We had to reach out to a bunch of schools before professor Loh wanted to present,” Kumar said. “Once we had 10 [neighboring schools willing to attend] he set up a date with us.”

The club advertised on Facebook, an online math community called Art of Problem Solving and a few Discord servers.

The speaker event was geared to students who wanted to see how math is applied in the real world. Loh also provided some insights on how schools could reopen.

Aside from being a professor, Loh is the national coach of the USA International Mathematical Olympiad team and founded the free personalized learning platform expii.com.

Throughout his career, the 38-year-old has earned many academic distinctions, including an International Mathematical Olympiad silver medal and United States Presidential Early Career Award for Scientists and Engineers. Loh’s scientific research considered many questions that included combinatorics, probability theory and computer science.

Before the pandemic, he often traveled across the world, giving talks to over 10,000 people each year. He has also been featured in and co-created videos totaling over 10 million YouTube views.

When the pandemic hit in March, however, Loh started to teach math on a YouTube livestream. He made an agreement with the Hertz Foundation in 2004, in which the nonprofit would fund his graduate school studies in return for Loh’s help in any national emergency. Since he is a mathematician, Loh said he thought his best way to help was by teaching math.

On his second day of live streaming, he came up with a different idea when reading one of his PhD students’ thesis, which talked about network theory.

Loh realized that he could use network theory to limit the spread of the disease and turned his attention to creating NOVID. The students Loh has worked with include Class of 2020 alum Brandon Wang, who was also on the International Math Olympiad team under Loh’s guidance.

When he started working on the app, Loh had not thought of pre-exposure notification and instead wanted to make a contact-tracing app. In fact, he did not think it was going to be very important when he and Wang first figured out the concept in June. He just thought the information could make a neat visual that could give people an idea about what was happening.

In his talk, Loh explained that the app was a radar to enable people to directly avoid getting infected.

Loh said it is the first app in the world that people can use to avoid getting sick. Every other app aims to prevent app users from spreading it.

Because of this, Loh believes the app lines up with human incentives and that people will be more willing to download it. He explained that this could change how people fight diseases forever.

Loh then went through an in-depth explanation on how the app works and showed some results from testing it at Georgia Tech University. Though only about 10 percent of the student population downloaded the app, it showed an exponential growth in the number of students at each degree of connection up until the seventh degree, which Loh believes makes the app effective.

Loh said that he wanted to present his idea to scientists and mathematicians in high school since they are the ones in charge of the future. In his talk, he told students that innovation is driven by people who do not want to do things the regular way.

“If you're the kind of person who wants to leave your mark on the world in some way, you can do that not just by being different for the sake of being different, but also by always examining how people are doing things and seeing if there might actually be a legitimately better way,” Loh said during the event.

Although only 140 of the 250 students who signed up came to the event, Kumar said it went well and received good feedback. In the future, he said the club will continue holding speaker events with alumni like Wang, who said he is willing to present in February.

“The presentation itself was really interesting, and the people who were there participated and asked a lot of questions,” Kumar said. “I think it was a success.”