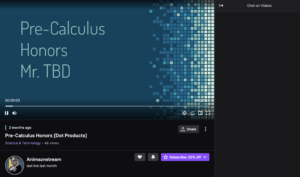 While video games and education are commonly viewed as two non-overlapping fields, AP CS and Precalculus Honors teacher Jarvin Bayona regularly incorporates the lessons he learned from video games into his daily teaching.

Bayona started his gaming journey at age 2. He remembers playing video games on his parents’ Nintendo Entertainment System. He especially liked “Bubble Trouble,” a deceptively simple video game where the only objective was to pop bubbles.

Ever since, Bayona estimates he has clocked in over 4,000 hours on games like “Dota 2” and “Call of Duty.”

Bayona not only enjoys the games themselves but also the ideas and concepts that can be applied to real life. For instance, video games often reward perseverance and learning from mistakes, and Bayona similarly tries to give his students the opportunity to fix their mistakes through test corrections and quiz retakes.

“There are times where you make mistakes. Let’s say you are playing Mega-Man or Mario and your character dies,” Bayona said. “You have multiple lives to try again and learn the level better.”

While Bayona believes that second chances are necessary, he does worry that a policy of giving second chances can be easily abused by students. He said this can be compared to “save scumming” in gaming, the act of saving right before a boss fight in order to restart in case the fight goes badly.

“For some game developers, this is not the intended way to play the game — maybe if you die the first time, you may think, ‘I’m not strong enough’ or ‘I need to do more side quests or pick up some more items’,” Bayona said. “But you can’t just brute force your way through the boss.”

Bayona’s experience as a Twitch video game streamer has also helped improve his class. On Twitch, Bayona loves to shoutcast his favorite games, commentating what is happening in the game. Because of this, Bayona feels like he has had a lot of experience breaking down any given situation — whether that’s in gaming or math.

“Shoutcasting has helped me in my speaking, whether I’m doing live coding or explaining math problems,” Bayona said.

Because of shoutcasting, Bayona said his verbal stamina has increased: He’s able to talk for hours on end in the classroom without needing a break.

Bayona said that, without his gaming experiences, he may not have learned the key lessons, gained the crucial experiences or obtained the important practice that helped create his own teaching style. Although gaming and teaching are viewed as polar opposites, Bayona hopes that he can bridge the gap between the two of them, bringing one world to the other.

“Seeing how students are performing in my class and how that reflects the grades I’m giving them, I think I’m doing a good job so far combining the two subjects,” Bayona said.