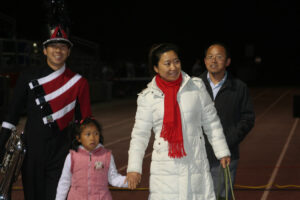 The marching band performed its last show of the season and for its 48 seniors, of their high school career, in the Western Bands Association (WBA) Championships at Diablo Valley College on Nov. 22. The band first competed in the preliminary competition and then placed 11th, qualified for the finals round in which they placed 11th as well.

Before and after the competition, emotions ran high, ranging from warm hugs, slapping of high-fives and even spilled tears. Many were both critical of the performance and proud of the work they had done.

“The show was very good, although I’m not sure the performance was as strong as the final performances have been in years past,” said senior Andrew Buchanan. “[This is because] I never really felt like we connected as a whole band.”

The band has competed against some of the best bands in the state in the 5A division in six competitions this season.

“I was happy with the improvement that the group made between Saturday and Sunday,” said band director Michael Boitz. “I thought Sunday was a really strong performance.”

Senior Mihir Sathe said that he thought “from the field, it sounded pretty good” but that the band could have done better.

“When you have a really good show, you know it,” said Buchanan. “You can just feel the intensity in the air.”

The band’s field show this year is titled “Mirror Images” and is an eight-and-a-half minute performance. The music was inspired by Peter Graham’s “Harrison’s Dream” and Benjamin Britten’s “The Young Person’s Guide to the Orchestra” and was a “very demanding and [advanced piece] for the kids, probably more [more challenging] than anything we’ve ever chosen before,” said Boitz. “Musically there are a lot of fugues and a fugue sometimes is a reflection of the earlier idea which is like essentially like a mirror image. That’s the storyline of the show.”

The seniors in the band were honored at the Senior Night on Nov. 20 at Benny Pierce Field at 8 p.m. Parents and friends crowded into the stands to watch their seniors “graduate” and to send the band off with good luck wishes to finals.

This year, it was run a little differently in order to tie the event in with the community. The admission to see the show was a donation of two cans, all of which went to the Second Harvest Food Bank.

“You can’t solve all the world’s problems with a magic wand but everybody can do a little something,” said Boitz. “It is really important that we [help out] when there are people [not far from this community] that are getting kicked out of their own houses. If we can help somehow provide for a better holiday, then we should do it.”

The night started with Boitz reading a short profile on each senior and calling him or her up to the spotlight along with his or her parents. The marching band then performed their show.

“The senior class is an incredibly talented group. They’re going to be missed very much. They are one of the more talented classes we’ve had,” said Boitz.

Speaking for the entire senior class, Sathe said that he will “definitely miss marching band, especially the music.”

“This has been the most eye-opening experience that [senior drum majors] Mara [Couch], Julia [Glausi] and I have ever had in our short lives,” he said. “I would be happy to do it all over again.”