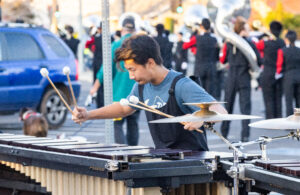 The 150 members of the marching band waited in anticipation, their breaths misting in the cold night air as they watched drum majors Ryan Lee, Christopher Okuno and Petr Tupitsyn standing at attention on the football field below for the results of the Nov 13. Napa Valley Band Reserve to be announced.

After nearly three months of rehearsals, they were thrilled to take home all four sweepstakes awards — general effect and showmanship, music, visual and mayor’s choice — as well as first overall in brass, percussion and color guard.

The show, called “Be Anything, Anywhere, Anyone,” explored both classical and jazz music, taking inspiration from “Pure Imagination” by Leslie Bricusse and Anthony Newley, Prokofiev’s “Symphony Number Five” and Bastille’s “Distorted Light Beam,” in addition to featuring vocals from Zachary Noah Piser, the alternate Evan in Broadway’s cast of “Dear Evan Hansen.” During the show, marching band members danced and mimicked birds and strongmen.

“It was a great season despite all the challenges we faced coming out of COVID-19,” freshman bass clarinet player Asheesh Goswami said. “The show was a unique blend of both traditional and contemporary elements.”

Band director Jason Shiuan said the music “guided the creative decisions” in show design, and that the visuals and music “melded together” well. He was proud of the high level of artistry the show presented.

“Not having played together for a year and a half, we really pulled off a show that was very creative, artistic and effective,” Shiuan said.

The show included innovative elements such as a “big band” that played while the rest of the band danced as well as a percussion feature, which brass captain and senior trumpet player Yoshiki Shimokawa said was not done before by many schools.

Along with the Napa Valley Band Reserve, the marching band also performed at two other competitions this season: the Cupertino Tournament of Bands (TOB) on Oct. 9 and the Foothill Band Review on Oct. 23.

Shiuan credited all this success to the students’ patience, focus and determination in the unique post-pandemic season. During their daily drills and rehearsals, Shiuan said that the band “bought into the mindset that if we do this right now, then it’ll pay off.”

Shimokawa pointed to the design of the show as spurring the band’s enthusiasm.

“Because the staff was able to design such an impactful show, the members were more excited and able to understand the show at a high level,” Shimokawa said.

Shiuan added that this year’s show has set the band up for continued growth.

“It was a big success thanks to a solid sense of community in the group, and the student leaders really stepped up to make sure the experience was positive,” Shiuan said. “I think it creates a lot of momentum for us, looking into what we want to be able to do in the future.”