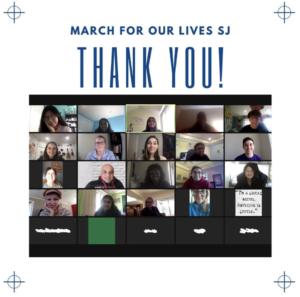 Unfortunately, in this country, the return to large crowds also means the return of mass shootings. The March For Our Lives movement, in response to the recent uptick in incidents, is moving to prevent any more tragedies through passing legislation and educating the public.

In remembrance of the shooting that took place at Stoneman Douglas High School on Feb. 14, 2018, and resulted in 17 tragic deaths, the San Jose chapter of non-profit March For Our Lives (MFOLSJ) is hosting a virtual San Jose Town Hall meeting on April 17.

The chapter has invited important policymakers such as assembly member Ash Kalra, Boston University professor Dr. Michael Ulrich and two speakers (Jai Ramamurthy and Reyna Duran) from the National Association for the Advancement of Colored People (NAACP) to bring awareness to the continuity and gravity of gun violence. The purpose of the event is to shed light on existing gun control legislation and discuss the necessity of future legislation to advance gun control efforts.

As the outreach coordinator of the San Jose March For Our Lives chapter and the vice president of the March For Our Lives Club, junior Kaaya Minocha is responsible for reaching out to politicians, professors and local activists. There are nine members in the chapter who are from a variety of Bay Area high schools such as Saratoga, Silver Creek and Westmont.

“The biggest goal of this event is to raise awareness about gun violence, which remains a very pressing issue. It needs to remain an urgent problem in order for things to get done,” Minocha said. “It needs to get the attention that it deserves.”

According to Minocha, the San Jose Town Hall meeting will be free form and the audience can ask questions directly to politicians and professors to hear their diverse points of view on the societal issue of gun violence.

The chapter’s determination for the April event stemmed from the success of their January event, called “Redefining Safety: Understanding Intersectionality with Racial Justice and Gun Violence Prevention.” MFOLSJ invited Dr. Cassandra Crifasi, the deputy director of gun violence at John Hopkins University, to address gun violence prevention and police brutality, as well as how students can specifically help with this issue. Although the chapter was initially struggling to increase their events’ attendance in 2020, the January event garnered a 50-student turnout.

Minocha believes everyone should share a passion to end gun violence as it is an “extremely intersectional” topic that relates to domestic abuse and other mental health issues.

“People don't know about the shootings that occur every single day, but it's my job to educate people about it, because I'm so passionate about it,” said Minocha. “The biggest thing is getting people to care about gun violence so that we can all collectively do something because students’ voices are incredibly powerful.”