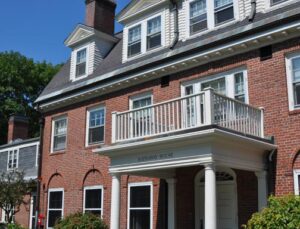 I was fresh off a FaceTime call with one of my dormmates from the previous year. I spent that year at Milton Academy, a boarding school in Milton, Mass.

We had just spoken to each other for the first time in two months; she called me after seeing a video from her Snapchat memories where we and one of our other friends laid on the ground outside our dormitory, Hathaway House, faces snow-speckled and belting music in our usual, tone-deaf manner.

We recollected details of the night the video was taken: singing in the snow, lying on her bed and talking about the craziness of the world. The night was exactly a year earlier, when the world shut down and an air of unfinished business had surrounded the evening. None of us had had the chance to say proper goodbyes.

For large pockets of time, we sat in silence — not the awkward kind, but the solemn, thoughtful kind — we were so lost in thought as the gravity of a year’s passing since the fateful day of March 13, 2020. An entire year had elapsed, but it felt like just yesterday that we huddled on her bed together, quietly awaiting the sunrise.

A couple days prior to lockdown, Milton had declared that a two-week “remote learning” period would occur after our spring break, yet we had a gut feeling that the response to COVID-19 would not be constrained to just two weeks.

Living in dormitories, we were shielded, tucked away from the outside world, I had no idea how the coronavirus scene was playing out in Saratoga.

My knowledge was limited to the numbers online (California had the third most cases nationwide at the time) and tidbits from my parents (which were so obviously downplayed). The pandemic — which was thought to merely be a dramatic version of the flu — was completely unknown to us, amplifying the eeriness of our circumstances.

There was speculation that China would close its borders in the coming days, and some of the international students were scrambling to find tickets home. One of the juniors I was especially close to, Emily, booked a last-minute ticket from Boston to Shanghai. Her flight departed around 6 a.m., and I woke up at 5 a.m. to see her off. I sat on the Hathaway benches with her, shivering in the crisp New England morning as we made promises to stay in touch.

The entire week leading up to Friday, the 13th of March, was full of dramatic hits, each revealing the gravity of the situation. Emily’s sudden departure was just the beginning.

The second hit was an email sent out by the administration, confirming that cases of COVID-19 had been detected on campus and that our spring break would be extended from two to four weeks and classes were to be held remotely.

Not surprisingly, this email sparked a frenzy among teachers — who were frantically trying to put together material for remote learning — and students — who were, for the most part, excited about what we thought would be an extended vacation.

Rumors swept through the school about which parents and students tested positive for coronavirus. A Facebook post stated that two parents of middle-school students had tested positive, and a couple days prior, the health center had a mysteriously large number of people staying overnight with flu-like symptoms. There was a debate on whether school should be held on March 13.

Despite the mayhem, many still doubted the danger of the virus. At the time, mask-wearing was simply a suggestion. My English teacher confessed that he found this two-week extended break to be a tad dramatic, as he was sure all the fuss would die down before long. (I disagreed.)

Packing was a huge ordeal. The dorms were going to be fumigated while we were gone, so we had to cram all of our belongings into drawers or store them away into suitcases. I packed as much as I could into a duffel bag, carry-on and suitcase. My mom told me not to worry too much about packing and that, if necessary, we could replace the items I left behind (three days after I landed, Santa Clara County went into shelter-in-place — so much for that!).

Gradually, we stowed away every part of our rooms, rolling them up and squeezing them into cabinets, shoving them into the closet or organizing them in our suitcases. By March 12, 2020, all that remained unpacked were basic toiletries and clothes for the next day and a blanket to use that night.

That night, all students and faculty received an email confirming that school would be canceled the following day. Students went out to say their goodbyes to friends who were still on campus. I walked to the student center and found four of my friends there, smiling and laughing; we were elated for our “extended break” but sad we wouldn’t see each other. After a few inorganic “see you in a month!” goodbyes, I returned to my dorm.

The dorm atmosphere had completely changed. One of my dormmates had been notified of a family emergency, and she was anxious to leave as soon as possible. Another was shivering, stuck in limbo between wanting to stay and knowing that, if she did, she’d never want to leave. The three of us went outside to lay in the snow for a while — chatting, singing and laughing as usual — yet there was an air of dismality that loomed over us, despite how much we tried to force normalcy.

In fact, the entire night was anything but normal. There was an ominous aura sweeping across campus. I remember one of my friends mentioning that they were scared to sleep, not knowing what the following day would entail.

We all dozed off in the early morning. I’d returned under my room and slept tucked under the single blanket that remained unpacked.

As rain came down, students exited out the house. Parents and students were so anxious to leave that all we had the chance for was a measly goodbye. In a way, everyone’s departure was sudden.

I sat on the yellow couch (Hathaway House’s designated hangout spot, aged with naps, karaoke sessions and more). Annabelle, a junior from LA, piled on top of me, in classic yellow couch fashion. We bid goodbyes until the stream of people walking down the stairs slowed down to a mere trickle.

I had to go to the library to pick up a book for a history paper (which, in hindsight, didn’t matter). After, I put on my hood and headed to the main campus until I reached the intersection I’d jaywalked countless times before in my early-morning scrambles. Keeping with tradition, I jaywalked again.

After checking out the book and tucking it under my coat to keep it dry, I turned onto the sidewalk and saw my English teacher across the street, exiting the student center. I called over to him. We made small talk; I asked him about his spring break plans, and he asked about my flight and journey home.

By March 13, COVID-19 was thought to only affect the elderly — this teacher wasn’t exactly young, and I was concerned for him. He was a teacher I’d gotten to know well over the year through his repertoire of stories of his travels to Korea and clubbing in Atlantic City. I’d come into his classroom after school on many occasions to talk and enjoy plenty of cups of tea.

This was the last of the hits.

I left, walked back to my dorm and dragged a duffel bag and two suitcases with me along the 10-minute walk to the main campus. I caught a shuttle to the airport and then boarded my flight, not to return to campus again.