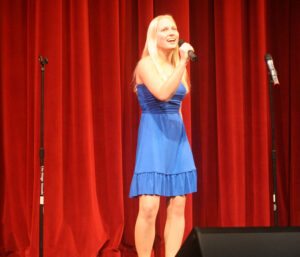 Lustenader sings the song "Mercy" by Duffy for her first performance.

Originally, Lustenader had not planned on joining the competition this year after her previous disappointments, but she couldn’t resist the thrill of being on stage.

Singing “Mercy” by Duffy for her first performance, Lustenader won the audience’s votes with her ease on stage. While many other performers held on tight to the microphone stand, Lustenader took control of the stage and worked the crowd.

Lustenader, however, was not the only one with a large crowd response. The lively audience of more than 300 people never seemed to settle down as every song was interrupted with cat calls, screaming and singing to help the performers when they forgot their lyrics. Junior Eric Sun and freshman Olivia Chock had their own fan clubs screaming in the audience—posters and all. Both Sun and Chock were unexpected singers who shocked the audience and the judges with their hidden talent.

Sun, who sang “All I Have To Do Is Dream” by the Everly Brothers, had never sung for an audience before that night, let alone anyone else besides his room walls.

“My parents didn’t even know I sang until I told them one day and they were pretty ecstatic about it,” said Sun.

Walking onto the stage, Sun had expectations to meet as his parents, his grandparents and many of his friends who attended the show.

“Since all my friends were coming and everybody was getting excited about me doing it, I couldn’t let them down,” said Sun. “I didn’t want to disappoint everybody and turn out to be the joke that they thought I was.”

Chock was also an eye-opener, being the only freshman to participate in this year’s competition.

“[Being the youngest] didn’t really matter that much because everyone was so nice to me,” said Chock. “I didn’t expect people to be so nice about everything because nobody knew who I was except for my friends, so I wasn’t expecting anyone to cheer.”

The performers also had enormous support from the judges: history teacher Kim Anzalone, English teacher Erick Rector, and biology teacher Lisa Cochrum. Judges Anzalone and Cochrum both wore in colorful dresses, accessories, and in Cochrum’s case, white socks and hiking sandals. The three judges often spit fire with each other and emcees juniors Branden Kapur and Varun Parmar to entertain the crowd, but they kept a positive attitude when dealing with the performers.

“I don’t want a Simon. I don’t think that’s appropriate for this level,” said assistant principal Karen Hyde. “I think we need to be encouraging because all of those kids are not only singing in front of people, they’re singing in front of peers, and nothing is more disconcerting than getting up in front of a group of your friends and trying to sing.”

The intermission acts took over the stage while the audience was given time to vote for the winner of the night. The intermission acts consisted of a rendition of Johnny Cash’s “The Ring of Fire” by senior Alan Menezes with seniors Chris Rea and Kate Stewart on trumpet and seniors Max Spears and Arun Bajaj on guitar, a duet of “Lucky” by Jason Mraz and Colbie Caillat sung by juniors Jan Iyer and Eric Jung, and two songs performed by the Ritards, an all-male a capella group with students from students from several schools around the Bay Area.

Iyer and Jung’s duet was a favorite of the night, eliciting the loudest crowd response in the event. The Ritards performed twice and had the crowd in hysterics with their second performance, a rendition of “Buy You A Drank” by T-Pain where sophomore Jason Shiuan serenaded a senior Julia Glausi from the audience while the rest of the group sang backup.

The night ended with last year’s winner junior Maddy Renalds passing on the crown to Lustenader before Lustenader did a final performance of “Mercy.” Her repeat performance, however, was a whole other show for the audience. Several of Lustenader’s friends rushed up on stage during her performance and danced along with the song in celebration of Lustenader’s victory after her four years of hard work.

“It feels amazing. It doesn’t feel real to be honest,” said Lustenader. “I don’t regret anything in past years because it was all practice for this year so it helped and it was kind of cool that I won my fourth year.”