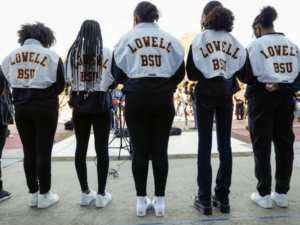 The Black Student Union at Lowell High School began to push for change in admissions and racial discrimination.

San Francisco is well known for its lottery-based public school system, which aims to eliminate educational inequality by randomly selecting students to attend various schools, instead of using a basis of location as is typical elsewhere.

Not every public school in San Francisco, however, follows this model. Lowell High School has held a prestigious reputation for years due to its separate admissions criteria. The school has accepted students based on merit, which has led to controversy regarding the ethics of the admissions process.

Since Lowell’s admission process emphasizes test scores and academic performance, it feeds into the systemic racism and classism that plague the school system. Students who get into Lowell are overwhelmingly from private schools, of higher income and disproportionately Asian and white. The system doesn’t give equal opportunity to students who are bused to school, must work to support their family or face other circumstances that affect their grades.

While the community has criticized the school on this issue for many years, the district has only recently taken action. After Black students at Lowell began rallying for a lottery admissions system, the district passed the proposal in early February.

Combined with Lowell’s history of imbalanced admissions and the economic inequality in San Francisco, this is a step that should have been taken years ago. Lowell has a long disguised subtle racism and discrimination under a facade of “prestige.”

Along with the school’s acceptances being primarily Asian and white, the lack of diversity in Lowell creates a hostile environment for Black students. Many students have spoken about facing racism from their peers, including slurs and bullying.

This instance and many other everyday occurrences only prove that racism at Lowell is still a prevalent issue that needs to be solved.

Switching to the lottery admissions system would take strides in curbing racism at Lowell. That being said, whether the San Francisco lottery system effectively mitigates education inequality remains uncertain.

Although the system does diversify the student body of public schools, it also indirectly results in higher attendance rates for private schools, which only exacerbates the economic gaps in the school systems. Inequality thus becomes a problem not among public schools, but between private and public schools.

In fact, while the rate of private school attendance in most states and cities ranges anywhere from 10-20 percent, a whopping 33 percent of San Francisco students attend private schools. This is a direct result of the lottery system in place, which simply means wealthy parents most often bypass public schools for private schools.

Along with this, many people of color and lower income students statistically do not benefit as much from lottery school systems, since they are often bused to schools miles away. According to JPAL, having to drive long distances in order to get to school can undermine academic success.

For these reasons, the only true solution to educational inequality would be to have good schools evenly dispersed among communities, regardless of housing prices and racial makeup. While this goal has many hurdles that could take many years to overcome, it should be the end goal for the educational equality movement.