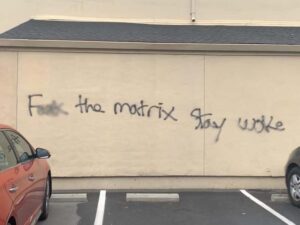 Photo by Sarah Hansen
Profane graffiti from the night of Oct. 31 scrawled across a wall at Los Gatos High School

On Nov. 1, Los Gatos High School’s staff and students entered a defaced campus: Hateful, racist, anti-semitic and homophobic slurs were spray painted on the walls and windows, while various rooms were egged throughout the campus. Additionally, a student-grown 529-pound prize pumpkin on display at the front of the school had been smashed in.

In a YouTube video addressed to the Los Gatos and Saratoga communities, Los Gatos Principal Kevin Buchanan asked members of the Los Gatos community to speak up if they had information about the perpetrators or saw anything on social media because the vandals were seen filming with their cell phones — presumably to post about their work — in surveillance tapes.

“It really is time that we end this culture of silence,” Buchanan said. “Please help us — otherwise this just may continue, because I simply can’t do this alone.”

After reviewing security footage, authorities determined three different groups on campus that night. One defaced the walls, windows and doors by spray painting the n-word, homophobic slurs and antisemitic language, another smashed the pumpkin and a third group egged the campus.

Of the multiple graffiti messages that had been spray painted onto the Los Gatos campus, the vandalism contained messages directed at specific faculty members.

One of the victims was chemistry teacher Ken Porush, whose classroom is adorned by a web of criss-crossed strings and dangling molecule-like paper balls attached to the ceiling. He decorates walls with posters featuring anti-bullying messages, humorous quotes from students and a pride flag with a Star of David on it — expressing support for the LGBTQ+ and Jewish communities.

But when Porush came into school a little before 8 a.m. on Nov. 1, he spotted a message spray painted on the wall next to his door. The black spray paint spelled out two words in large, messy letters: “F— Porush.”

He immediately called the maintenance staff, lamenting the wasted time and effort it would take to clean up after the vandals. But as the situation sunk in, he began to speculate about who could have committed the act. Of the thousands of students he had taught over his 22-year career at LGHS, Porush wondered who could have been angry enough at him enough to do something like this.

“Without being certain about who was involved, it’s hard to say that it affects my relationship with my students because if I look at it that way, I’m going to be [suspecting] every class, every student,” Porush said. “You can make yourself crazy trying to figure it out. I don’t think I can go around trying to suspect students and figure out who it was. Otherwise, I won’t be able to teach.”

Another group, whose relation to the campus perpetrators is unknown, also found the address of a teacher — whose identity remains confidential for privacy — and vandalized their home in Campbell less than eight weeks ago.

Porush believes that these incidents reflect a larger issue that transcends campus grounds into the general community. While he does not think the vandalisms represent the student body as a whole, Porush said that the events are bound to happen again unless the people responsible are identified or come forward.

“This is not my house, but it’s my home away from home. And it’s really kind of an attack on me,” Porush said. “My name was on the wall. I’ve never had anybody threaten me in that way before.”

Student discusses a culture of bigotry

Junior Yo-Han Gorman, who is nonbinary and identifies as a member of the LGBTQ+ community, recalled walking onto campus the day after Halloween to see anti-gay slurs spelled out in black letters across the cafeteria’s double doors.

“I first thought it was probably a prank by the sophomores or freshmen. But I know that Los Gatos has a huge problem with racism, and the [hate speech] was just really disturbing to see,” Gorman said.

Gorman recalled an incident where some of their friends were harassed with homophobic slurs after attending a football game: A group of sophomore football players  circled Gorman’s friends on bikes and used anti-gay slurs multiple times.

According to Gorman, moments like these represent the long-standing culture of homophobia in the school which, when combined with racism, lead to increasingly public displays of bigotry like the vandalism that took place on Halloween.

“This doesn’t surprise me. It’s just disappointing to see because I know people who became like this when they switched to the wrong group of friends — this is the kind of thing they would do,” they said.

One in a series of multiple incidents

The Nov. 1 vandalism was far from the first sign of hate crimes in Los Gatos; instances like these seem to reflect a larger trend.

In early October, for example, swastika graffiti was found in three different locations throughout Los Gatos, including at the Addison-Penzak Jewish Community Center (JCC).

Lael Gray, the chief executive officer of Jewish Silicon Valley — an organization dedicated to preserving the Jewish culture and community in the Bay Area — noted that anti-semitism is considered the “oldest form of hatred.” Because of its long-term and widespread prevalence, Gray said, she was unsurprised, albeit upset, at the more recent incidents of anti-semitic vandalism. She also emphasized that Jewish diasporas have continually experienced phenomena where once they begin to feel safe in a community, anti-semitism begins to “rears [its] ugly head” and upend their safety.

“Anti-semitism in [our culture] is the type of thing that is very difficult to change,” Gray said. “Jewish people tend to be concerned when there are trends of more people expressing hatred towards us, because we’ve seen throughout our history that this leads to very serious consequences — real threats to our safety and our lives.”

Over the past few years, the country has seen trends of increased anti-semitism across the country. The Anti-Defamation League (ADL), an organization dedicated to tracking incidents of anti-Semitism in the United States, found that the number of anti-Semitic incidents across the U.S. reached a historic high in 2019 (with a 56 percent increase in assaults) and although the numbers declined by 4% in 2020, the Audit of Anti-Semitic Incidents stated that 2020 still had the third-highest rate of reported anti-semitic incidents since the ADL began keeping track in 1979.

Apart from individual vandalism, assaults and harassment, there have also been a handful of alarming major incidents — in 2018 a gunman killed 11 people and wounded six in a synagogue in Pittsburg and another opened fire during a 2019 Passover service in Poway, Calif., killing one woman.

“It’s got to be scary and devastating [for Holocaust survivors],” Gray said. “I know that. People want to feel safe in the United States. I’m sure at some point felt like coming to the United States, [survivors felt they] would have safety after what they experienced. So this kind of thing is disturbing.”

Gray thinks this hatred stems from fear, and that a lot of hateful behaviors grow from a need to find a scapegoat for the difficult situations people find themselves in.

More recently, Los Gatos Mayor Marico Sayoc was verbally attacked by a group of attendees during the Oct. 5 town council meeting. A far-right group of residents had been consistently disrupting Town Council meetings by refusing to wear masks, expressed racist and anti-LGBTQ+ rhetoric and touted QAnon talking points, according to Mercury News.

Group members verbally attacked the Mayor’s son — spreading conspiracy theories about his sexuality — leading the Mayor’s husband and group leader Cyndi Sheehan, as well as other group members, to get into a loud “altercation.” Sheehan then accused the mayor’s husband of allegedly threatening to kill her, and put up a restraining order. When a resident was dropping off the letter at the mayor’s home, the door went unanswered and the resident began to scream “f— LGBTQ” and demanded the mayor leave Los Gatos, according to Mercury News. Following this incident, a decision to keep council meetings online to prevent such disruptions was made.

On Oct. 15, Town Attorney Robert Schultz sent a letter to Sheehan stating, “Disrupting a public meeting is a misdemeanor punishable by up to six months in jail and $1,000 in fines.”

Despite this, when the council meeting was held online on Oct. 19, group members began protesting in front of Mayor Sayoc and Vice Mayor Rob Rennie’s homes, breaking town law that “prohibits picketing within 300 feet of a residence.”

The increased distress prompted California state legislator Senator Dave Cortese and Assemblymember Evan Low to send a letter to Town Manager Laurel Prevetti on Oct. 19, requesting an explanation of the policy of harassment for public leaders and what all is done to protect their families, as well as action to keep elected officials safe and prevent bullying. He also condemned the recent disruption of meetings.

Following these events, multiple groups, including the Los Gatos Union District and Jewish Silicon Valley, partnered with one another to take action and hold a United Against Hate rally. The event, which took place on Nov. 14, involved over 2,000 attendees marching from Fisher Middle school to the Civic Center to condemn all acts of hate speech and encourage unity in the community. Gray’s hope was to strengthen community bonds and encourage community members to combat discriminatory attitudes and acts of hatred.

“People need to understand each other and learn to trust each other, in order to solve the problems that are happening in our society,” Gray said. “If I could make a statement, to anybody that I think might make a difference, it would just be, ‘Let’s talk. Let’s get to know each other. Help me to understand what it is that you’re afraid of.’”

According to Gray, there are many people in the community who wish to stand together despite divisive and hateful attitudes, and the United Against Hate rally is a reflection of that sentiment. She is hopeful that the rally helped to “bolster all of us in rejecting the kind of hurtful, hateful behavior that we’re seeing.”

“I think there’s so much power in a large gathering of people standing together and saying, ‘We’re here for each other, and we don’t hate you.’ It’s the most powerful thing to see that there are allies,” Gray said. “It’s good for me to be there for other people who feel that they’re being persecuted, it’s good for me to stand there and say, ‘I’m with you, I see you and I’m not going to stand for this kind of behavior against you’ — and for them to do the same for me. It’s just so reassuring.”