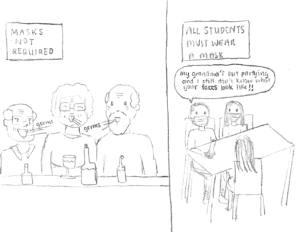 Photo by Anamika Anand
Laws allowed adults to go maskless at bars but not students at schools.

Permalink
Despite promoting a “follow-the-science” approach, county and school mask mandates often did the opposite.

On March 13, 2020, Santa Clara County issued the nation’s first stay-at-home lockdown order, shuttering businesses and schools. Businesses and schools opened within the ensuing year, and the mask mandate was lifted before being reimposed. But for schools, mask mandates issued during the lockdown were never lifted until now — a full two years later.

What took so long?

Public health officials from the state and county failed residents and students, creating additional mask mandates in the county and schools that failed to follow science and common sense.

Let’s start with the state: Gov. Gavin Newsom has been hailed for his pandemic policies, but also been criticized — to the point that he faced a recall election. But I’m not here to argue whether masks are effective (because they are) or whether they should be implemented (leave that up to qualified experts).

Yes, nobody likes lockdowns and, yes, there are various parts that I disagree with. But at the same time, California was a nationwide leader in preventing the spread of COVID-19 and keeping hospital beds available — our state did a great job.

But what didn’t make sense was the state’s separate school mask mandate. The state’s guidance allowed at-risk seniors to party at dive bars without masks, while forcing virtually-immune toddlers to mask up in ventilated preschools.

The science is clear: Kids and teens are far less susceptible to hospitalization and death from COVID-19 than virtually every other group. There was no need to keep school mask mandates in place longer than the overall mask mandates.

The county was forced to adhere to the state’s guidance, and thus was forced to use this two-mandate system. But the county doubled down on overall masks, keeping the overall county mandate in place longer than the state.

Alas, these issues in our pandemic policy are no longer relevant as the state moves into its endemic phase. But as the state and nation develop frameworks for addressing future public health crises — including the lingering threat of other Omicron variants — these public health mistakes are important to note and remember for the future.