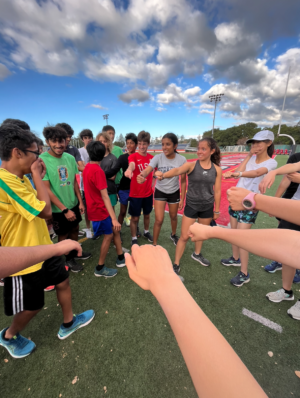 Photo by Timothy Leung
Boys and girls cross country rounds up for a break after practice.

Permalink
Ian Tippetts describes his history with the sport, including competing in a full IronMan.

Growing up in an athletic household, current boys’ and girls’ cross country coach Ian Tippetts showed he had a knack for sports. He played soccer in elementary until middle school, when he began playing basketball. He later joined his high school’s football, cross country and track and field teams. He has coached cross country for 23 years.

“Back in the day, there weren’t a lot of entertainment options, and sports were a great way to get outside and have fun with your friends,” Tippetts said.

As a mentor, Tippetts strives to apply his knowledge of fitness, from reading studies on physiology and exercise science to incorporating his diverse experiences with athletic training, into his coaching in order to help students not only run faster, but also become stronger and recover quicker.

“Unlike a lot of coaches, Tippetts does some of the workouts with the team,” senior cross country captain Elizabeth Stoiber said. “Whether that’s running on Saturday mornings with us in Sanborn [Park] to make sure nobody gets lost, pushing us to be faster, teaching us better form during hill workouts, or biking long runs with us, his involvement in the runs overall helps us become stronger runners.”

Tippetts’ daughter, senior Mika Tippetts, feels that his attitude toward coaching has affected how he approaches parenting and everyday life.

“He takes mental health into account with a lot of things, but also recognizes that pain is temporary and you can push through it,” she said. “He has always been a super hard worker and makes a lot of sacrifices to accomplish his goals.”

As an athlete himself, Tippetts has participated in a variety of running events throughout his life. One of his most intense races was during his coaching career in 2014, when he ran his last full IronMan Triathlon, which consists of a 2-mile swim, 112 mile bike ride, followed by a marathon, totaling up to a sum of 140.2 miles.

“Completing these [intense races] gives you a feeling that only comes from doing something difficult,” Tippetts said. “It’s something you can’t buy, and nobody can give you. You have to earn it.”

His training routine for the IronMan race included a mixture of different forms of cardio such as running, swimming and biking.

“During the race there are a lot of emotions that try to weaken your resolve,” Tippetts said. “It takes a lot of concentration to keep positive and work through the pain. You have to find the flow in a race.”

Since the pandemic, Tippetts has stopped participating in intense races. However, because of his love of mountain biking and trail running, he’s still considering getting back into training for the Xterra triathlon starting this winter, which includes swimming, running and mountain biking.

As of now, he has slowed down on his exercise routine due to his job, though he still enjoys running with his close friends and family.

Coach Tippetts emphasizes the importance of teamwork and said he believes it is essential for coaches to listen to their runners. His favorite part about running is spending time with his athletes.

“I like to think of myself and the kids as a team, working together to help them reach their goals,” Tippetts said. “I get to talk to them about their future and the world. They are inspiring and they give me hope.”

He encourages his runners to be ambitious and challenge themselves by pushing them beyond what they think they are capable of. He said this gives them the opportunity to feel proud of their own achievements.

“You can always find fun, but satisfaction is the ‘something’ that you have to earn,” Tippetts said. “Only you can give it to yourself.”