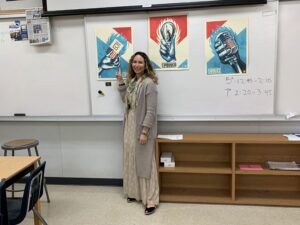 Photo by Sam Bai
Gloriana Garcia standing in front of motivational posters in her room.

Permalink
After Margarita Morelle left for maternity leave, Gloriana Garcia was hired as the long-term substitute for AP Government and History in Film.

On May 11, Saratoga mayor Tina Walia stepped into Room 606, which was filled with eager students. She had been invited by long-term substitute Gloriana Garcia to give her knowledge on the local government.

Such a relevant discussion is not an uncommon scene in AP United States Government and Economics, where Garcia has been working to educate students on the practicality of politics. She has been teaching AP United States Government and Economics and History in Film in place of history teacher Margarita Morelle, who has been on maternity leave since February break.

Garcia is unsure about her teaching future.

“There are a lot of opportunities that I have to consider, but I really want to teach another AP Government class since it’s been so fun,” Garcia said.

Garcia has a background in journalism and entrepreneurship, alongside 13 years of experience teaching students from K-12. She received a bachelor’s degree in journalism from San Francisco State University and a master’s degree in specialized education from Santa Clara University.

From 2011 to 2014, Garcia was a substitute teacher for Mission San Jose High School in Fremont, where she discovered her love for teaching high school students, she said.

Prior to her leave, Morelle had already taught a large portion of the material to the students, including information about the legislative and judicial branches. Garcia was assigned to teach about the executive branch, bureaucracy and Congress.

By incorporating her previous experience as a journalist into the discussions, Garcia said she hopes to provide students with a different perspective on current events. For example, she begins each class with spotlighting a timely topic in the news, such as Berkeley’s housing shortage or Supreme Court Justice Ketanji Brown Jackson’s nomination.

She encourages students to share their opinions by hosting discussions about current events and debating controversial topics. After a successful event with Walia, she is now reaching out to more guest speakers, including Congresswoman Anna Eshoo’s staff.